I have some really interesting web statistics for you. W3Techs released a couple ranging from content management systems to image file formats.

Let’s start with a platform that we all suspect now has its own fair share of web sites only we mightn’t have known that as of this month, it now controlled a quarter of all websites. So a whopping 25% of all websites now run on WordPress. “WordPress is used by 58.7% of all the websites whose content management system we know. This is 25.0% of all websites.” Released about 12 years ago, the platform has managed to become a web power house. Of the content management systems, Joomla came a distant second with 2.8% usage. 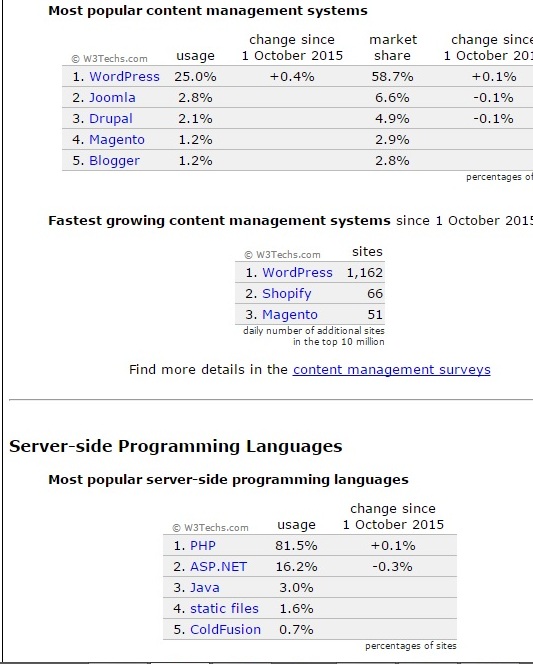 But before we go on analysing the other results, just how does W3Techs manage to determine these stats when there are hundreds of millions of websites? well in this case, they took approximately 10 million sites based on the popularity on the Alexa ranking to do this.

In other news, JPEG is the most popular image format with 71.6% usage and is closely followed by PNG which has 68.4% usage. The report however noted that PNG is the fastest growing image format.

On the traffic analysis tools, Google Analytics is still the highest with a 52.9% usage while WordPress Stats comes third with a 4.1% usage while Yandex.Metrika comes second with a 4.6% usage. WordPress Stats was expected to be on the list since 1 in 4 websites now run on it. Many users are increasingly using the WordPress Mobile app to analyse traffic to their sites.

Earlier in the year, the security firm Securi has released a report on WordPress vulnerability of users. The report noted that any WordPress Plugin or theme that leverages the genericons package is vulnerable to a DOM-based Cross-Site Scripting (XSS) vulnerability due to an insecure file included with genericons. So far, the JetPack plugin (reported to have over 1 million active installs) and the TwentyFifteen theme (installed by default) are found to be vulnerable. This led WordPress to issue a warning to hosting companies like GoDaddy among others.