Home Cloud An Insight Into This New Service From Dropbox; “Paper”
Share

Dropbox aims to make its collaborative note-taking tool as the new Office 2016 and in this report, they exclusively gave Engadget an insight into their new “Paper” service coming soon. With more users now appreciating cloud services not just for storage but other interactive services, Dropbox aims to compete with other big names in this field. This also comes as other giants like Dell have decided to play big in the cloud space in its new deal to acquire EMC; the company that runs VMware. See how Dropbox aims to not just compete with names like Google and Microsoft but offer its own a bit differently in the report below.

Six months ago, Dropbox quietly announced a collaborative note-taking tool called Notes and launched it in an invite-only beta test. But starting today, the product is being officially branded as Dropbox Paper and the beta test is expanding significantly. You’ll still need an invite, but the company gave us a preview of what’s probably the biggest addition to Dropbox in years. It’s far too early to tell if Paper will be able to keep up with entrenched tools from Google, Microsoft and many others — but there are definitely some interesting features here that make it worth keeping an eye on.

For now, Paper is a web-only app that you can access through your Dropbox account, although the company says it’ll have a mobile app ready to go when the product comes out of beta. At first glance, Paper’s UI is reminiscent of the scores of minimalist, lightweight text-editing apps that have come out in the past few years, such as IA Writer. But while IA Writer and its ilk are designed for solo composition, Paper is all about working together. As in Google Docs, multiple users can edit a document at the same time. Each is designated by a colored cursor, and the user’s full name is displayed in the margins, crediting their contributions to the file.

From a text perspective, Paper is quite basic; there’s only one font and three sizes available. You can do your basic bold, italics, underline and strikethrough formatting and format text into a block quote, but that’s about it. Dropbox specifically said that the purpose of Paper was to keep the focus on sharing ideas rather than formatting. In particular, the company made it so that you can use its app to share pretty much anything, regardless of what tools you might be using. 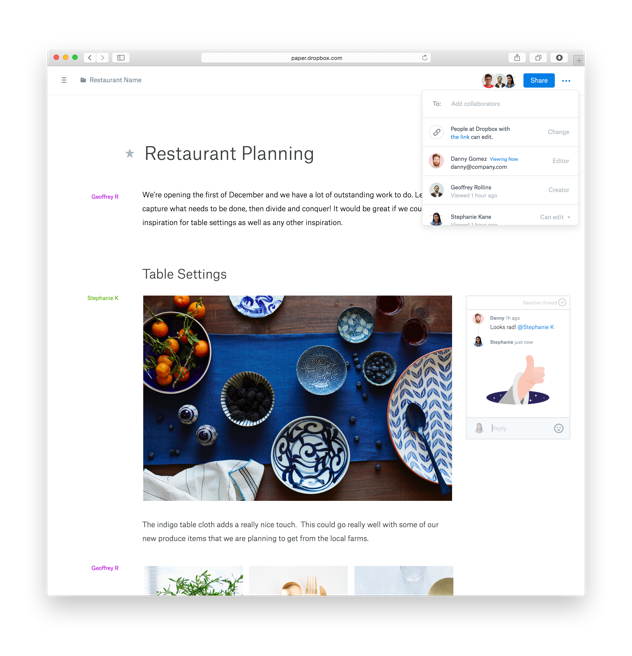 “Work today is really fragmented,” said product manager Matteus Pan. “It happens across multiple content types — be it images, code, tables, even tasks.” And that clutter extends to the tools being used. “I might be working on PowerPoint,” he added. “Someone else may be writing code, another in Google Docs — teams have really wanted a single surface to bring all of those ideas into a single place.” At first glance, Paper does a pretty good job of bringing a bunch of different content and tools together.

Project managers can add to-do lists, complete with checkboxes and “@” mentions to the member of your team who needs to take care of the associated task. If coding is more your game, you can start typing lines of code right into Paper and it’ll automatically format it appropriately. Beyond text, any file you store in your Dropbox can quickly be added to Paper — if you grab the sharing URL of the file and paste it into Paper, the program automatically formats a preview for you. That way, you can peek at an Excel or PowerPoint file right in line with the rest of your Paper document, or click to see it in full or save to your Dropbox. Google Docs files are even supported here — it’s the first time Dropbox has really integrated with Docs and Drive, itself a competitor to Dropbox’s main business.

Paper can display just about any kind of file you throw at it.

Single photos can be dragged and dropped right into Paper, and you can create some mini-galleries, with two or three smaller images lined up. Everything is draggable, so you can reorder things quickly; you can also left or right align images and type text around them. For extra drama, you can blow an image up to a full-bleed, widescreen photo that takes up the entire browser window. If you need to add some multimedia, just dropping a YouTube link into the document will convert it to the full video player, and you can embed audio files and playlists from Spotify or SoundCloud as well. Naturally, you can comment on everything added to a Paper document, and Dropbox even jumped on the stickersbandwagon — so if a giant skeleton thumbs-up is the only way you can properly express your approval, you’re covered here.