Elon Musk and Bill Gates are both brilliant tech billionaires and while they agree on many things they also disagree on this much too. The latest one being that Bill Gates disagrees with Elon Musk’s artificial intelligence doomsday predictions including a world war 3 prediction that no one saw coming. He even went as far as saying the threat from artificial intelligence is worse than North Korea and saying that government should step in to regulate the AI era before it’s too late.

He made his disagreement known when he joined Microsoft CEO Satya Nadella in a Wall Street Journal interview on Monday. Elon Musk wants more government regulation but Bill Gates says people shouldn’t worry so much about that telling the WSJ Magazine that “The so-called control problem that Elon is worried about isn’t something that people should feel is imminent.”

Bill Gates is of the opinion that Elon Musk could be very well de-emphasising the best artificial intelligence has to offer humanity by painting an apocalyptic picture of the technology.

But Bill Gates isn’t the only tech guy who isn’t happy with Elon Musk’s rhetoric, Facebook CEO Mark Zuckerberg had a spar with Musk on the subject with Musk saying Zuckerberg’s understanding of the subject is limited. 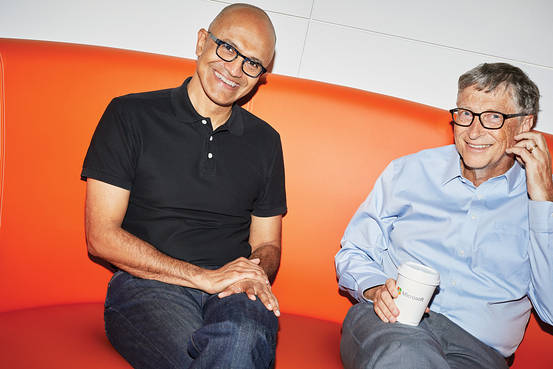 The core of the Microsoft argument is this though, humans have the control and choice and that’s a valuable asset in the development of artificial intelligence systems. He added that humans and AI systems can collaborate to achieve better results. Satya Nadella said “The core AI principle that guides us at this stage is: How do we bet on humans and enhance their capability? There are still a lot of design decisions that get made, even in a self-learning system that humans can be accountable for.”

On the matter of choice, the Microsoft CEO said “There’s a lot I think we can do to shape our own future instead of thinking, this is just going to happen to us. Control is a choice. We should try to keep that control.”

Well Google’s senior vice president of engineering John Giannandrea also disagreed with Musk on the subject when he told an audience at TechCrunch Disrupt SF last week that he isn’t worried about an AI apocalypse.

That said, there’s something all the men who have so far disagreed with Musk all have in common and it is that all their companies have so far invested time and resources into building complex artificial intelligence systems. Microsoft on its part is expanding Cortana’s application beyond its ecosystem even as they use the technology to perfect their speech recognition technology.

Google perhaps has devoted the most resources to this through its DeepMind based in the United Kingdom.

This is not to say Elon Musk is not invested in AI too. Through his OpenAI initiative, they have gradually promoted the “safe” development and application of AI.  The OpenAI bot defeated a Dota 2 (Dota 2 is an online multi-player game where players use characters called heroes to fight each other) expert just last month.

NO one knows is the authorities are interested in regulating AI anytime soon and when Bill Gates suggested that they (the government) should start taxing robots, an EU commissioner disagreed with the idea.