Home Research/How to do it No Matter What, Do Not Drill A Hole In Your iPhone 7 Please
Share

What you’re about to read sounds unbelievable but some people are actually doing this.

This YouTube video above surfaced about two weeks ago and now has over 12 million views. Using the account TechRax, it shows someone drilling hole into the iPhone 7 which doesn’t come with the 3.5mm earphone jack. If you watch it till the end, you’ll actually see the guy testing the newly drilled hole using an external speakers which produced some sound thereby proving that you can bypass Apple’s plan for you to use the $159 Airpods instead.

But here’s the thing, it’s a really bad idea that should be discouraged. These guys are now using memes in the comment section especially to show that it actually works. This user for example says;

Everyone making comments about this being a joke don’t get it. This is 100% real. It’s not as easy as the video shows. If you drill to deep, you can in fact destroy the phone. All you have to do is drill through the casing. If you want, pm me. I’ll give you a PO box you can ship it to and I’ll do it for free. You just pay the shipping. I’ll need your username and password to make sure everything is working.

Don’t fall this guys. Even if you were to assume that it works, how about the high possibility of damaging the phone which some consider an investment. Even if you’re on a contract, your provider may not replace the phone once they find out you tried drilling a hole into it in the first place.

But if you believe some of the comments there, please try it and let us know.

The images below are also fake; 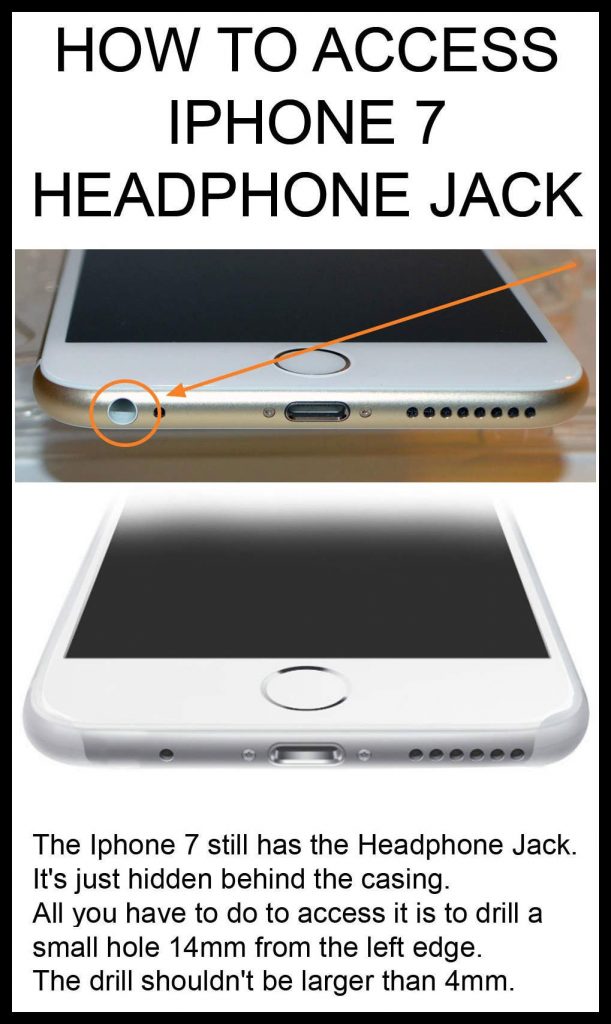 Also according to Business Insider where we got the images from , if you’re still curious about what’s actually behind the speaker grill where the headphone jack used to be, you don’t have to ruin your new device. A piece of plastic containing a “barometric vent” is hidden behind the metal.