For those people like myself who have been on one social network or the other for many years, you are probably thinking that the last thing we need is another Social network. Right?

The drag community has been fighting with Facebook for weeks regarding the social network’s “real name” policy.

Facebook has been cracking down on the names people are using on the site, forcing them to use the names that are on their government-issued ID cards or risk getting their profile suspended, in an effort to “keep our community safe.”

The irony, however, is that sometimes people use pseudonyms on the site in order to feel safe.

A lot of noise has been made in the media about Ello being the latest “Facebook Killer” but that is a song we have heard before.  I took out the time to take a self directed tour of the site on my laptop to see if it truly had the potential to make me abandon Facebook forever. I made a few observations.
The minimalist layout design makes it feel more like a blog- very Tumblr-ish. It seems to be focused on imagery with large photos taking up most of the screen with minimal text to support it. Ello doesn’t offer much in terms of innovative or ground breaking features, however their anti-advertising philosophy will be very appealing to internet users who are increasingly inundated with ads on every corner of the digital space. 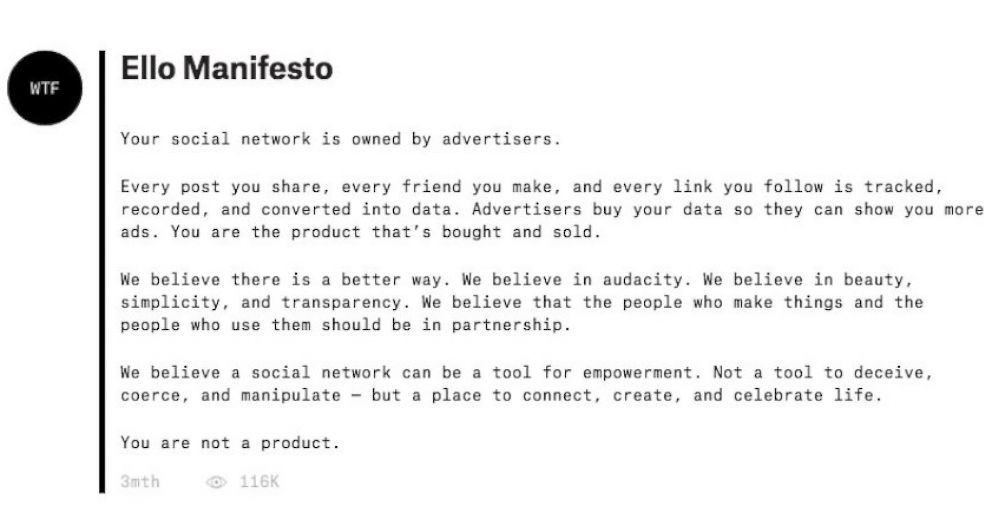 From a branding perspective, the site uses neutral coloured themes which makes it seem simpler to use but may no be visually appealing to some users. Unlike Facebook that uses a characteristic blue which has deep psychologically perceptions in marketing and branding.
The jury is still out on Ello, but I suspect that we will be seeing more from this platform in future. Visit the site to day, post your comments and lets discuss it.
Cheers