Elon Musk who is the CEO of Telsa, SpaceX and Chairman of SolarCity while making some announcements said he was looking to make solar roofs and not solar panels as we’re used to.

“It’s a solar roof as opposed to a module on a roof,” Musk said on the SolarCity earnings call. “It’s not a thing on the roof, it is the roof.”

The idea is that instead of just selling solar panels that can be placed on someone’s existing roof, SolarCity can sell the entire roof itself with the solar power capabilities built into it, potentially opening up a whole new market.

“If your roof is nearing end-of-life, well, you’ve got to get a new roof anyway,” Musk explained. “And so, why not have a solar roof that’s better in many others ways as well?” Tesla made a $2.6b/988b Naira offer to buy SolarCity in a move that will eventually create one huge clean energy company seeing as Tesla is an electric car making company.

As you may expect, this has already got people debating the whole idea of a solar roof which looks something like talking about 5G when 4G hasn’t still reached a majority of the world’s population. But what if this is what our continent (Africa) needs?

According to a 2015 KPMG report on Power in Africa, “when looking at global rankings with regard to the quality of electricity supply (out of 144 countries), the best performing countries in the region in the most recent report were Mauritius (45th), Morocco (48th), Namibia (52nd), and Tunisia (65th), while the worst performing countries were Guinea (144th), Nigeria (141st), Chad (140th), and Burkina Faso (139th). Other large African economies that performed poorly include Angola (138th), Tanzania (125th), and Ethiopia (118th). Furthermore, in its Doing Business 2015 report, the World Bank measures the ease with which businesses in numerous countries can access electricity. The “getting electricity” indicator captures the procedures, time and cost involved for a business to obtain a permanent electricity connection to supply a standardised warehouse. In this regard, Africa performed relatively poorly, with only 12 countries managing to rank inside the top 100 (out of 198 countries).

In fact, 26 African countries, including the continent’s two largest economies, namely South Africa (158th) and Nigeria (187th), did not even breach the top 150 countries. The best performing countries in the region were Tunisia (38th), Mauritius (41st), Cameroon (52nd), and Rwanda (62nd), while the worst performing countries were Madagascar (189th), Nigeria (187th), Central African Republic (CAR, 186th), and Uganda (184th). Other large African economies that performed poorly include Angola (157th), Kenya (151st), and Algeria (147th)”. It is a then evident that African nations are in dire need of energy especially alternative energy sources. While many African nations are still rich in oil, there is still no local capacity to satisfy local energy needs. Just to paint a clearer picture in your mind, Nigeria for example has a need of  about 33 million litres of petrol per day to function and this is based on 160 million people although current reports put the population at 180 million. Breaking it down further, Nigeria currently has an installed electric power capacity of 10,300 MW and available capacity of 6,000 MW to service 180 million people as opposed to South Africa’s over 45,000MW of produced electricity for 52 million people. At this point you may be surprised but as a result of this, a new kind of industry was born and that’s the alternative power supply (clean or fossil fuel). Individuals and businesses alike began to buy power generators and depending on where you live, these generators can become your main source of power supply while the government one becomes your backup but as a result of the huge number of people using this particular source, demand for petroleum products have also increased dramatically which markets sometimes cannot meet up and that’s why it’s not uncommon to see long queues at the petrol stations sometimes and if you live in Nigeria, you’ll understand what I mean. 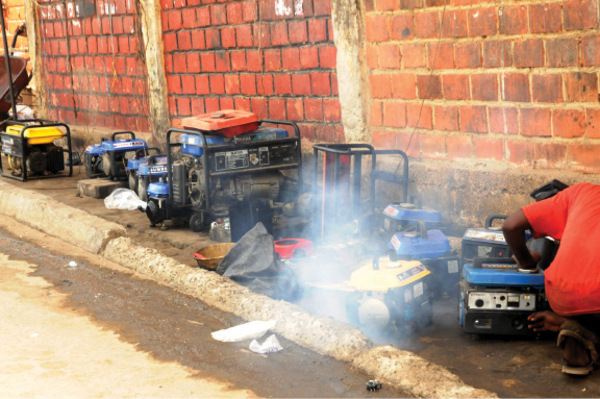 There are sad cases where people (including a whole family) have died from fumes from generating sets. This coupled with unexpected queues at petrol stations made Nigerians to start looking at other sources and that’s why you now see many individuals and corporations switch over to safer sources like electric inverters whose batteries charge when you use a generator or public power supply and switch on when they fail. Sometimes depending on the quality of the batteries you are using, your inverter may last as long as eight hours which is sometimes longer than what you receive from the public power supply and again this depends on where you live. 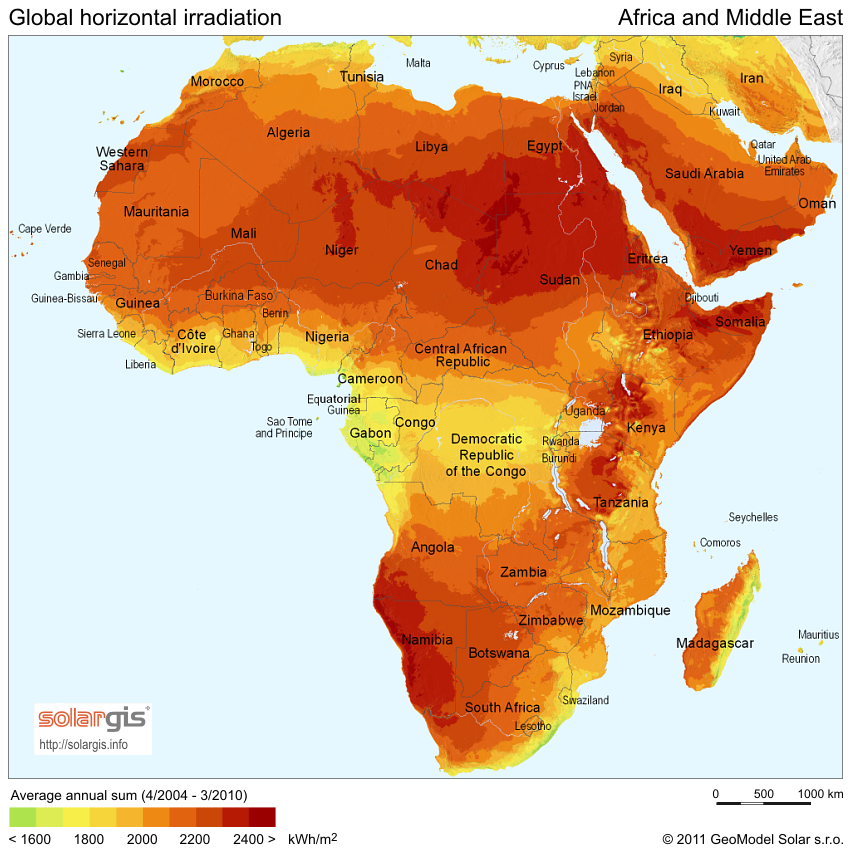 Africa and the Middle East have some of the highest irradiancy levels in the world (source: Wikipedia)

But seeing as you need the same unavailable electricity to charge your inverter batteries, companies began importing solar powered inverters. These use solar panel usually mounted on roofs and as you drive around middle class and rich neighborhoods, this is gradually becoming a common sight because these require much more investment than the fuel powered generator. Another reason you see the panels more in these neighborhoods is because most of the people who live in them own the houses which makes it easier to host such panels on roofs. If you live in a rented house, you can imagine the stress involved in dismantling these panels each time you want to move house. That and cost makes it harder for people living in the suburbs to afford solar electricity but that is now changing as well. With improved technology, panels no longer have to obey the theory that more solar powered generation means bigger panel(s) and couple with the theory of demand and supply, prices have steadily been coming down. But even that is becoming insufficient which is why Elon Musk’s solar roofs idea may be something to watch and as Paul Middleton puts it his book: The end of Oil, Gulf and Nigeria, we will run out of oil at some point and with a growing demand for energy, we may need to start looking for alternative sources. With such roofs and high solar irradiancy levels in Africa, this may be a long awaited answer to our domestic electricity needs. Like the electric powered Teslar vehicles, the cost might be higher at the beginning and should gradually drop over time and that’s what I expect to happen with solar roofs should it eventually become a reality. I imagine this would involve roof making companies and will some serious logistics to eventually install. Logistics like how to strike the balance between the primary functions of a roof and solar panels built into them that need unfettered access to sunlight. There is also the question of how buildings are designed and wired to accommodate such roofs. Maybe Elon Musk will release an eventual blueprint like he did Hyperloop.

The International Renewable Energy Agency predicts that solar will account for 13 percent of the world’s electric output by 2030 and maybe predictions like this are responsible for a Elon Musk’s decision to make Tesla and SolarCity one company especially for business sake. CNN Money reports that SolarCity’s net loss grew to $250 million in the second quarter from $156 million in the same period a year earlier

Elon Musk is also the author of the Hyperloop transportation method

Elon Reeve Musk was born in June 28, 1971 and is a South African-born Canadian-American business magnate.