Facebook announced Messenger Day yesterday to now bring you its now slideshow format of your activities. While Instagram and Snapchat stories tell us what you did a while ago, Messenger Day is slightly different because this helps you connect with friends as you tell a story which also disappears after 24 hours. Facebook started testing the feature last year in a few countries but has now globally launched the service which allows you share stuff either with the public or select friends.

The main difference between Messenger Day and Snapchat Stories is timing which means that one deals more in the present while the other is about the past which you intend to bring to the notice of your friends. But yes I know what you’re thinking, it’s another way Facebook may have copied Snapchat but here is the thing, this is tweaked and it looks like each time Facebook copies anyone, they manage to turn it into a success. So for example no one disputes that Snapchat invented stories, but brands now prefer to use Instagram Stories than Snapchat Stories in a new survey which actually showed that Snapchat may have suffered a 40 percent decline in the number brands using its stories.

The other thing is that Facebook knows how to convert its new services into revenue so we’re hearing that there may be ads in between Messenger Day posts which would be Messenger’s first main independent revenue source. Messenger now has over a billon users and Messenger Day is available to iOS and Android users.

Messenger Day appears on top of the chat thread in the Messenger homepage.

But here’s how it works 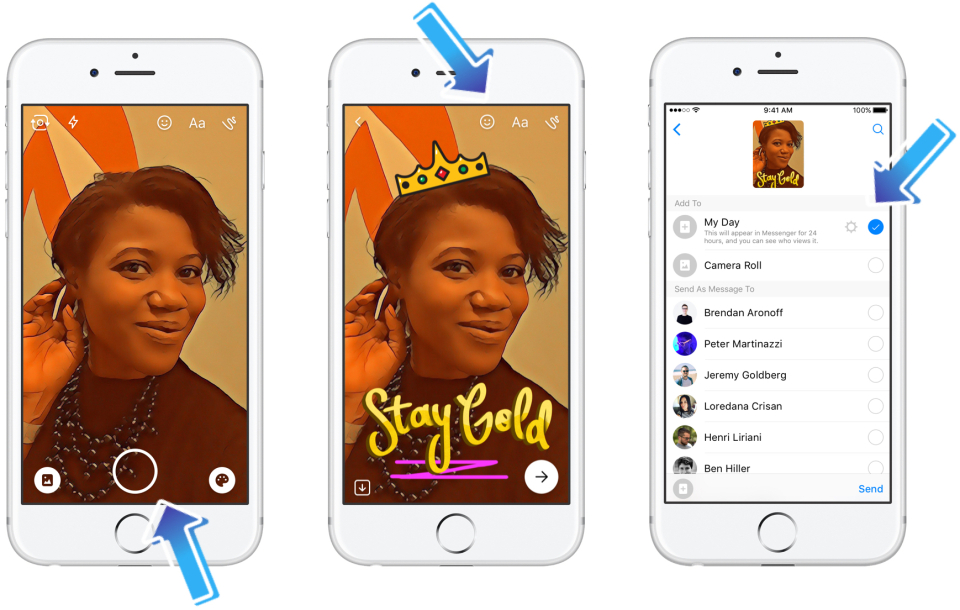 Like I said it appears on top in your Messenger homepage and there you will see a list Day previews of friends who have set their Day to the public or just for you to see. Again unlike Stories, you will see an actual preview instead of just the name and profile and picture. You can simple tap to fast forward or rewind or simple hold to pause.

On top of being able to see Days posted by friends, you would see a green button which indicates that they are Active Now and available for chat. You can now privately reply to a Day using option that have been put there by Facebook to save you the typing stress like the “100” emoji or just a simple “wow” but if you want to say something, there is the custom provision that allows you say just whatever you want to say.

If you’re already actively chatting with someone and they post a Day, you will receive a notification to say they have posted a Day which you can now watch and reply to.

Since Messenger released it big camera feature in December, it has been used by hundreds of millions to easily capture the moment and easily share but with Day as a service, this could very well become powerful tool in the hands of Messenger users.

After you take a Day image of video, you will be allowed to add drawings and text captions to better help your friends understand what it is you’re trying to pass across. You will be able to share your Day in simple photos, GIFs or even a 15 seconds video.

On the privacy side, Day is by default visible to all your contacts unless they are blocked ones but you can further define who sees your Day post.

Other fun stuff that make the new Day different includes the call to action like “who’s up for?” , “Drinks anyone?” etc but this looks like something Facebook’s “Conversation Topics” which is designed to help you break the conversation ice.