The release of the watch itself hasn’t put Apple in the top position of manufacturers of wearable devices. According to the latest IDC data, shows that the wearables market is doing fine compared to the PC and tablet markets which we previously reported on this site. But while the Apple CEO touted their place in the wearables market at the product launch event yesterday, data shows that Apple lost market share to Fitbit and China’s Xiaomi respectively. 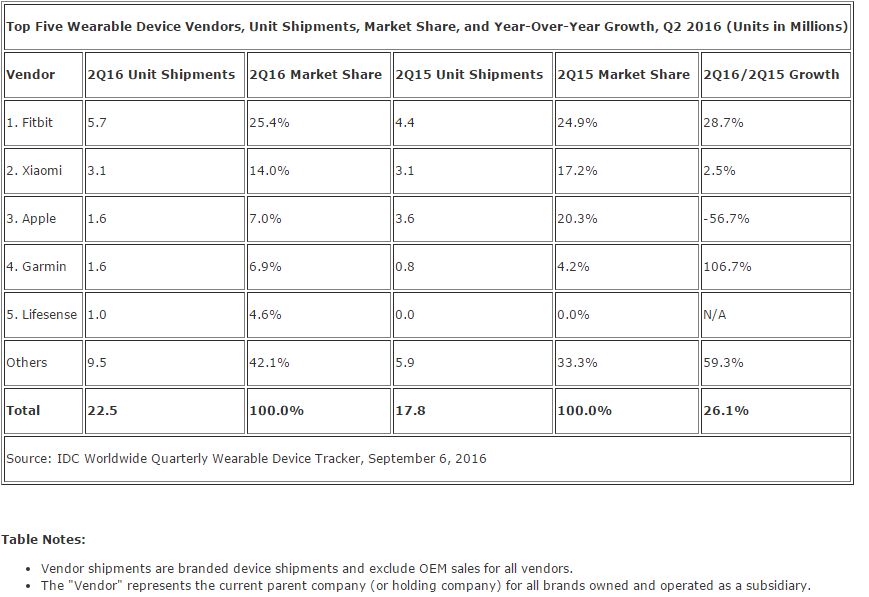 Shipments of wearable devices reached 22.5 million in the second quarter of 2016 against 17.8 million in the same period in 2015. While the overall wearables market grew during 2Q16, its two categories traveled at different speeds and directions. Basic wearables (devices that do not support third party applications) grew 48.8% from 2Q15 levels while smart wearables (devices that support third party applications) declined 27.2% year over year.

“Basic wearables, which include most fitness trackers, have benefited from a combination of factors: a clear value proposition for end-users, an abundant selection of devices from multiple vendors, and affordable price points,” said Ramon Llamas, research manager, Wearables. “Consequently, basic wearables accounted for 82.8% of all wearable devices shipped during the quarter, and more vendors continue to enter this space. The danger, however, is that most devices end up being copycats of others, making it increasingly difficult to differentiate themselves in a crowded market.

While the overall wearables market paints some sort of rosy picture, let’s narrow it down to the smartwatch market which experienced its first decline in the second quarter of 2016. IDC says  shipments actually fell 32 percent in the same quarter. But this is where Apple still leads the likes of Samsung, Lenovo and LG. Apple controlled 47 percent of the market and just before you celebrate that figure, it was 72 percent last year in the same quarter and this means their year on year growth currently stands at -55 percent when you break it down further by actually shipment figures which stood at 1.6 million against 3.6 million units. Samsung, Lenovo, LG and Garmin all gained ground and took a big bit out of Apple’s commanding lead last year. A summary of the IDC report is that Smartwatch vendors shipped 3.5 million units in the second quarter of 2016 (2Q16), which was down substantially from the 5.1 million shipped a year ago. Apple held the top rank by shipping 1.6 million watches. However, it was the only vendor among the top 5 to experience an annual decline in shipments. In fairness to Apple, the year-over-year comparison is to the initial launch quarter of the Apple Watch, which is in many ways the same product offered in the most recent quarter with price reductions. 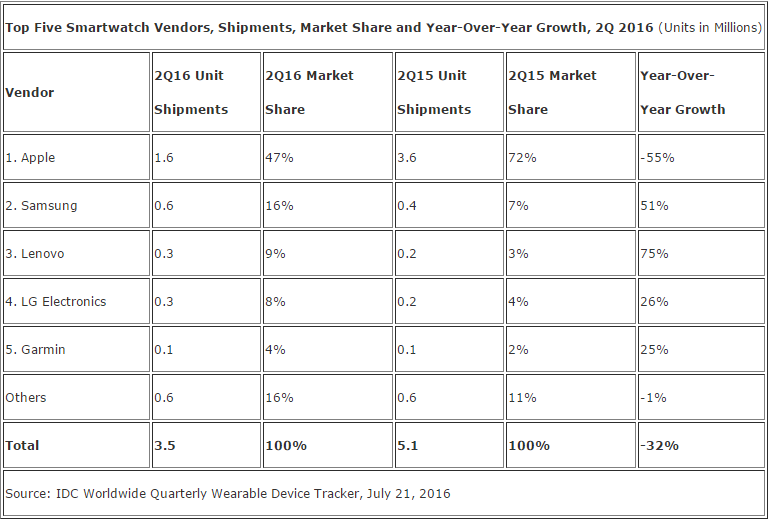 But this tells us something more because it’s not all about Apple, it tells us that the market is going and becoming competitive but is Apple about to fight back in the smartphone sub-sector of the wearables market?

Well Pokémon Go and Mario coming to the Watch 2 and the iPhone/iPad respectively and this could change their fortunes. That’s not even mentioning the new Apple Watch Series 2 Nike Edition which come with branded Nike bands. This may arouse some interests in certain quarters especially among athletes.

Both Nike and Nintendo shares have received some sort of boost as a result of the announcement. Just to tell you the power of Pokémon Go, Nintendo shares have gained nearly 50 percent in value since the launch of the AR game. According to USA Today, “shares of Nintendo’s U.S. listed shares jumped 29% to $36.32 apiece Wednesday after the gaming pioneer said during the Apple conference it would bring several titles to Apple’s various mobile platforms. Nintendo plans to release a version of its co-owned Pokémon Go augmented reality game to the Apple Watch and an “endless runner” style game using Mario Bros. characters to the iPhone called “Super Mario Run.” Contrast Nintendo stock’s big jump with the barely noticeable 68 cent, or 0.6%, rise in Apple’s own shares to $108.38 after the meeting.” This might just be Apple’s chance to regain some of the lost ground with respect to smartwatches.

Whatever your take, the wearables market is poised to be worth about $25b by 2019 and so there’s plenty of room for everyone.