While there are billionaires (in USD) cut across different sectors of the world, just how many of them do we have in the tech business? The diagram below shows that while the population of the US may be 320 million, it has 51 tech billionaires while China with a 1.3 billion population has 19 tech billionaires. 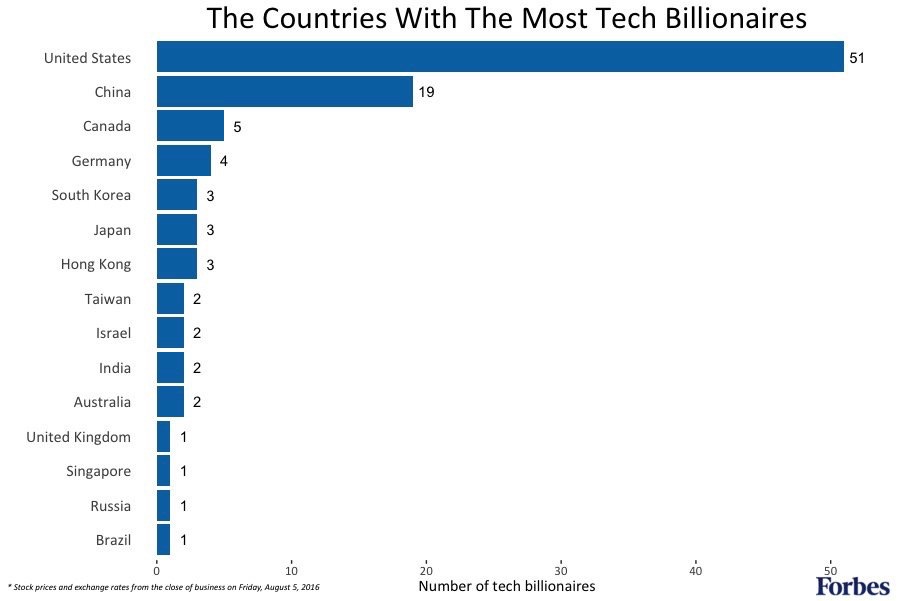 Of the 15 countries sampled, eight of them are ranked the top ten economies in the world by GDP. So it’s in order to say the countries with the best economies are more likely to produce tech billionaires. Asia as a continent has a population of 4.4 billion people and represents 60 percent of the world’s population and the Asia-Pacific region represents 40 percent of global GDP. That’s some serious economics numbers out that region and so it’s not surprising to see that of the 15 nations mentioned in the chart, eight of them come from Asia and if you narrow it down to the Asia-Pacific area, the number gets higher.

The obvious reason could be that they are not practicing tech guys but if you say that how about Jeff Bezos (the Amazon guy) who is not a tech guy per se if you look at his profile. But could it be that some of the tech billionaires here have other major sources of income that have easily overshadowed their tech activities?

Whatever reason you may attribute for this, Africa is now the fastest growing region (by economic indices) in the world  but this growth is not strong enough to unleash millions of talents across the continent who still cannot find that enabling environment to launch new and big ideas.

The next big name could come from Lagos, Nairobi, and Johannesburg or from any other city in Africa who knows?

8 Signs You Were Hacked And Need WordPress Malware Removal

The Galaxy Z Fold 2, Note 20, Note 20 Ultra And Other Announcements By Samsung

6 Reasons Every Small Business Needs An Automation Strategy In 2020