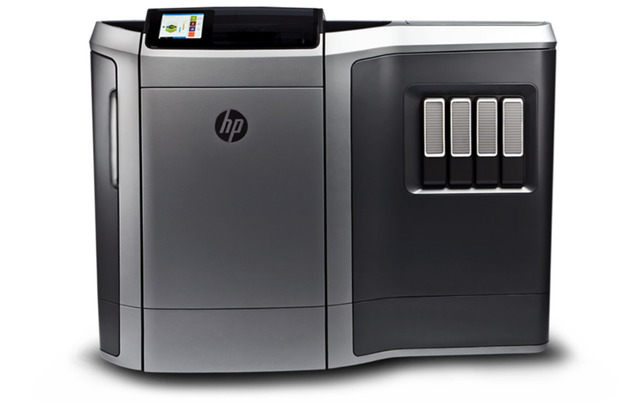 The new industrial 3D printer, about the size of a washing machine, is 10 times faster and 50% less expensive than current systems on the market, HP said. The printer can also use a myriad of colors and materials. 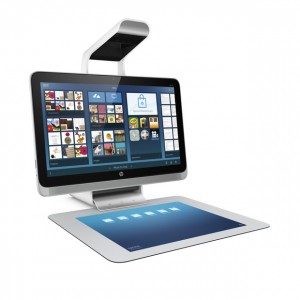 The company also announced Sprout, a new immersive computing platform that combines a 23-in touch screen monitor and horizontal capacitive touch mat with a scanner, depth sensor, hi-res camera, and projector in a single desktop device.
Sprout allows users to scan physical objects into a virtual platform that then combines multiple applications for development. Those objects can then be sent to a Multi Jet Fusion printer to be created on the fly. 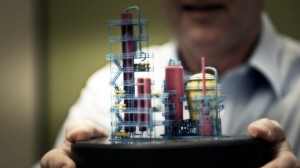 A model of an oil rig printed by the new Multi Jet 3D printer. Notice the details and colors all printed in one pass.

The Sprout platform also has a collaborative capability so multiple developers or artists can work on that same project at the same time. HP released a software development kit for Sprout today.

The Sprout platform is not designed to interact exclusively with the new 3D platform, but will serve more as an artistic and engineering design tool.
Sprout is available for pre-order on HP’s website today and it will be in stores beginning on Nov. 8 for $1,899.

Describing it as a new direction for HP, Dion Weisler, executive vice president of HP Printing & Personal Systems, said along with traditional print and compute platforms, the company will now be focused on “blended reality,” which allows users to move physical objects into the digital world, manipulate them and churn them back out as new products.
“We will forever change the landscape of 3D printing and will indeed create the tools that will trigger the next industrial revolution,” Weisler said at a New York press event today.

The machine uses a print bar with 30,000 nozzles spraying 350 million drops a second of thermoplastic or other materials onto a print platform.
The printer uses a proprietary multi-agent printing process that HP calls “Thermal Inkjet Arrays” that simultaneously apply multiple liquid agents to produce greater accuracy, resiliency and uniform part strength in all three axis directions.