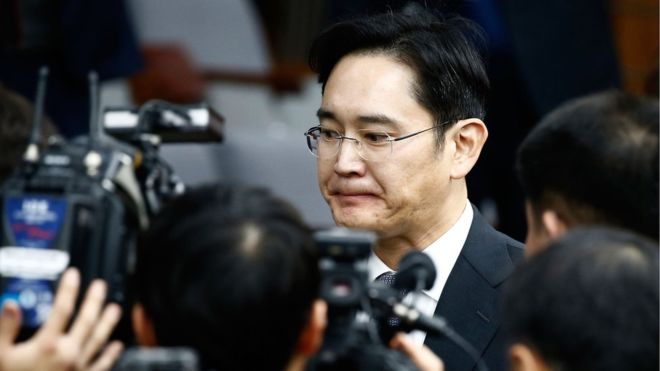 As the South Korean electronics firm unveiled its latest smartphone at a luxurious event yesterday in New York City, the heir to the Samsung empire was Lee Jae-Yong in jail at Seoul. He is presently facing trial on charges of bribery and other criminal offenses.

South Korea has a long history of light sentences for business leaders.  Sometime in January, this heir to the Samsung empire, faced a similar charge but was convicted.  His father, Lee Kun-hee, Samsung Group Chairman faced the music twice and was pardoned twice.

Lee will discover his fate on Friday, where the judge will determine whether he is guilt or not of the allegations against him.  Lee’s case has engulfed the news in the country, leading to a widespread content of a juicy relationship existing between the government and business tycoons in the country.

If the accused is found guilty, he may be spending the next 12years in prison.  However, this doesn’t seem to have a negative impact on Samsung massive electronic business.  During Lee’s trial, the electronics giant has recorded a massive boom in profits that outshone its rival, Apple.  Also, the strong sales of new flashy smart phones have helped it overcome the fire-saga of the Galaxy Note 7.

A fusion of corporate success and criminal allegations are normal occurrences in South Korea.  This is a long standing aching problem and it appears that the people are sick of it. Last year has Park Geun-Hye, former South Korean President engulfed and Lee engulfed in a criminal scandal that led to Park’s termination from the blue house.

Lee is presently accused of giving bribe to Park, in exchange for government support for a merger that accorded him power over Samsung’s straggling empire. As expected, Lee denies every allegation and has pleaded not guilty to the charges of bribery, perjury, concealing criminal profits, embezzling and hiding assets overseas.

It’s unclear if Lee will be convicted or discharged, following the long time footsteps of many other chaebol chief and seeing that the new elected president, Moon Jae-in promised to crack down on corrupt business tycoons in the country.

However, David Kang, Director of the University of Southern California’s Korean Studies Institute predict that the newly elected President, Moon Jae-in will lessen his sentence after Lee has spent a short time in prison. He said:

“It’s like a rite of passage.  The question will really be how long does he serve.”

After all, the same president who promised to crack down on family conglomerates was seen in the company of about 50 South Korean business leaders-executives from the country’s largest chaebol.  Among the business leaders were Samsung, Hyundai and SK Group.

Kang says “Moon’s administration is just going to work with these companies. So how different is it really going to be?”

However, Chang Sea-jin, Professor of Business Administration at University of Singapore believes otherwise.  He believes that things in Korea have taken a different course and are changing slowly.  Lee’s father, who is still officially the Chairman of Samsung Group, escaped the brunt of justice because he happened to be a leader when corporate corruption was tolerated in the country.

All fingers are crossed.  The verdict on Friday and what happens afterwards will determine if South Korea is indeed an “a cleaner society and less tolerant to corruption” as Chang says.