Home Gadgets Lenovo Yoga Tab 3 is a stand-out tablet, with a powerful built-in projector That Many Probably Didn’t Know About 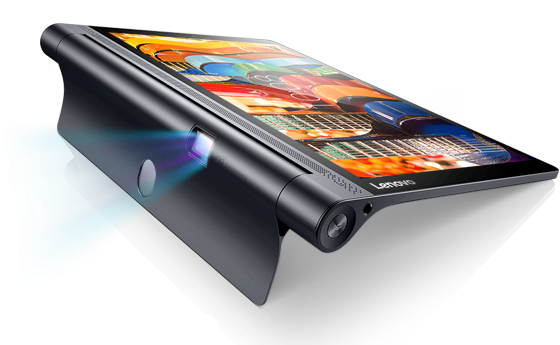 At first glance the Lenovo Yoga Tab 3 Pro is a clunky looking thing, all swollen down one side like it’s been stung by an electric bee. Pick it up and hold it portrait-wise however and that beefy edge suddenly makes sense. The tablet sits comfortably in your palm with a grippy heft that leaves you confident enough to gesticulate with your free hand, safe in the knowledge that you won’t accidentally frisbee it out of a nearby window.

Yoga Tab 3 Pro looks great with its comfortable faux-leather finish and durable metal chassis components. But its durability isn’t limited to the quality of its materials – Yoga Tab 3 Pro also has splashproof IP21 certification. No need to be afraid of the water! Just like the name yoga , it’s slim , flexible, stylist and flat.

The Yoga Tab 3 Pro boasts a revolutionary integrated projector that turns any room into your very own theater. Experience a new way to enjoy videos and movies. Use the rotatable hinge and super bright 50 lumen output to project an image of up to 70” (178cm) on any wall or ceiling and you’ll likely be gesticulating, because this tablet wants to be the device of choice for power-meetings and presentations. The trick is right there in the thick end, where the Yoga Tab 3 Pro hosts a powerful, 50-lumen pico-projector capable of beaming out its display at sizes of up to 70 inches. In theory, you can compose presentations on the train, before arriving at a client’s office and blowing everybody’s minds with your secret, tablet-sized projector.

The quality of the projection won’t have you binning office equipment, but it’s functional enough. Focus can be easily adjusted on screen, and automatic keystoning will immediately calibrate for the angle at which you’re projecting, preventing your pie charts (or your Netflix) from becoming embarrassingly skewed. It’s forgivable that the Yoga is less bright than a dedicated projector, performing decently at short distances but requiring blackout blinds in the meeting room if you hope to use it at anything approaching its full 70 inch girth.

As a regular old tablet, it’s not a bad proposition either. It runs Android, it’s 299 ppi 10-inch screen is razor sharp, it’s bulky edge is crammed with additional battery capacity (running the projector only made a small dent in the thing’s power reserves) and its sleek metal hinge, while heavy, is also a stylish kickstand.

But the novel projector feature is what makes this tablet stand out from the dreary parade of Android-flavoured iPad-alikes. The Yoga Tab 3 Pro is a surprising device with a purpose and definition and is a must grab.