Home Open source Linux Leads The Public Server Space But How Does It Fare On Desktop Usage?
Share

Public servers running on Linux are the most popular with a 35.9 percent in February 2015 with Windows coming second at 32.3 percent market share in the same year. This may have prompted the announcement by Microsoft in March to integrate its SQL database into Linux which is open source by the way.

By how’s Linux performing on desktop though?

Usage of Linux operating system is still considerably when put against other operating systems. Last month according to W3Counters, Linux desktops accounted for 2.48 percent of all web visits from tracked websites.

The results are for website visits which shows Chrome still topping the charts when it comes to browsers. But the results above shows which operating systems were used to surf the net by users across the world.

NetMarketShare though says it recorded a 2.02 percent market share for Linux in June 2016. StatCounter also recorded 1.46 percent for Linux in the same period as others. 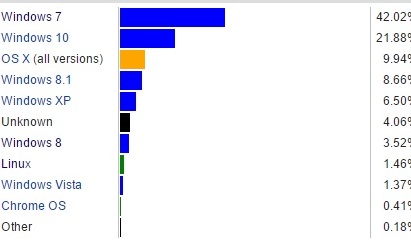 According to a report on Wikipedia which was originally posted on StackOverflow, “Developer Survey Results 2016” survey, English-speaking users “Desktop Operating System”-preference for development use is (and “by next year’s survey fewer than 50% of developers may be using Windows” that is for 2017):