Mark Zuckerberg has advertised on full-page US and UK newspapers to apologise for the recent data scandal his platform has caused.

He admitted doing wrongly, at least. He said that Facebook could have prevented their data from being exploited by the British political consulting firm in 2014. “This was a breach of trust, and I am sorry,” he said in the ads. 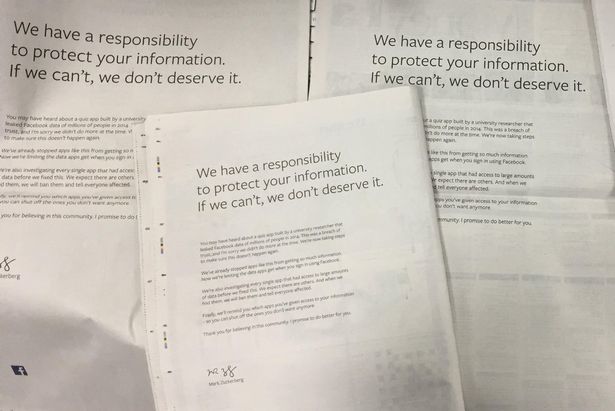 This means more than one thing. First, it proves Dave Lee wrong. He had earlier argued that “contrition has never been Mr. Zuckerberg’s strong point” because he did not officially apologise to the staff members who had been entangled in the scandal and to the affected users whose data were exploited. Secondly, he could be keeping to the end of his bargain because the social media firm is currently running at a loss. Last week, the firm lost about five million dollars. Elon Musk deleted all his firm’s pages on Facebook, sparing only two- the Boring company and the AI firm which he co-owns.

The BBC reports that the “full-page apology was featured in broadsheets and tabloids in the UK, appearing on the back page of the Sunday Telegraph, Sunday Times, Mail on Sunday, Observer, Sunday Mirror, and Sunday Express.” The said advert was seen by the readers of the New York Times, Washington Post and Wall Street Journal.

Mr. Zuckerberg explained the sequence of the events in detail. A University researcher, Dr. Kogan developed an app to study human behaviour in 2014 and the data was leaked to the British firm in 2014 without his knowledge. He further assured the users that such incidence would not be repeated in future as the social network has already changed its rules to prevent a similar breach from occurring in future. “We’re also investigating every single app that had access to large amounts of data before we fixed this. We expect there are others and when we find them, we will ban them and tell everyone affected,” he said in the advert.

Notably, however, before the breach took place, Facebook had been warned by Ireland’s Data Protection Commissioner (DPC) that security policies were too weak to evade data breach. The third-party developers only had to adhere to information rules, which wasn’t stringent enough “to ensure security of user data.”

Facebook has assured users that it would strengthen its protections with the DPC’s recommendation.