When Facebook announced chatbots within its Messenger app for businesses last April, it didn’t take time before we started seeing brands jump on it to get closer to their customers. Not just that, we were actually waiting for a local bot developed by a Nigerian and while researching online, I came across Nairabot; you get quick information on foreign exchange rates in Nigeria. This comes at a time when it’s difficult to know what the Naira exchanges against the dollar since the Central Bank of Nigeria (CBN) floated the Naira (Nigeria’s currency) to allow everyone buy and sell the dollar at market rates. In other words, the CBN has subjected the currency to market forces but let me leave that to economists.

Developed by Fowotade Babajide a young 23-year old Lagos based developer, the bot gives you daily exchange rates by entering one of the commands below; 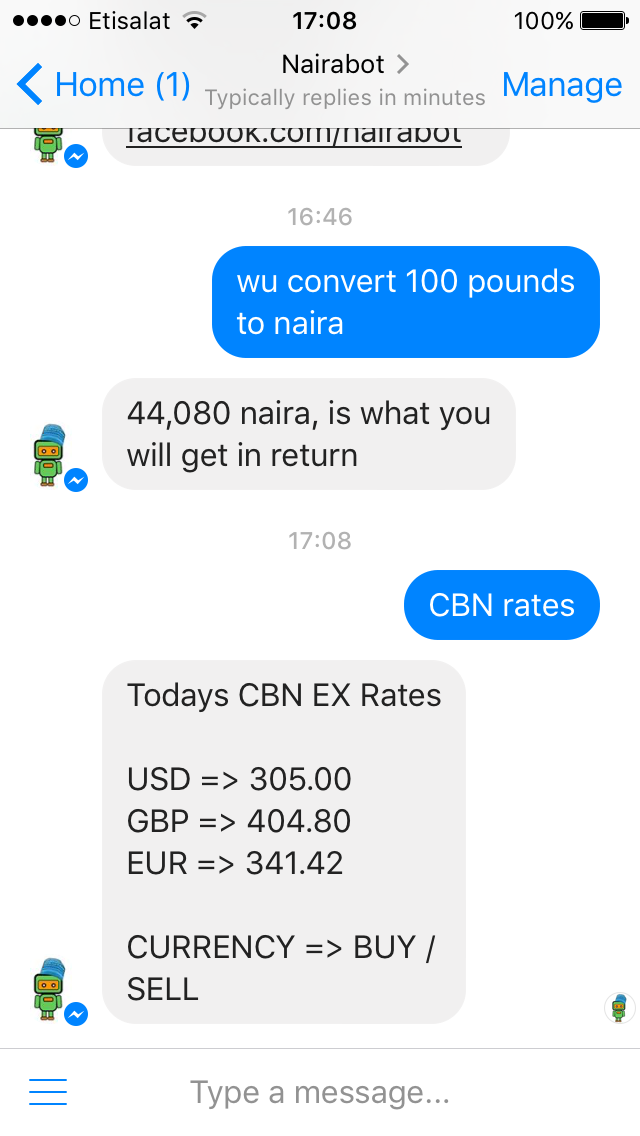 So it’s simple to use, launch the Messenger app on your smartphone or go to Facebook.com on desktop and visit their page. For those using the app, search for Nairabot and then enter one of the commands at a time to get rates.

Well the simple answer is that they are the future. In my article titled; Of The Many Apps On Our Phones, Majority Of Us Spend 80% Of The Time In Just Five Apps, I said people don’t spend as much time in apps as you may think and that they spend most of their time in just five of their installed apps and why it’s this way is another topic for research but we can’t rule out interest and ease of information dissemination within apps. But chatbots on the other hand have the ability to connect with us in ways that app cannot. A well-developed bot has the ability to learn more about us and our interests using modern artificial intelligence (AI) techniques. So using Nairabot as an example, as you frequently use the service, it should be able to dynamically take quickly answer you based on your history and suggest other useful features that may apply to your query. This will eventually reduce our dependence on apps at a time when we have all decided to go mobile whether it’s for social or business purposes. A report released yesterday by comScore says smartphone apps now account for 50 percent of all digital media time in the United States and in tech, what’s true for the US is true for other countries as tech knows no boundaries especially with respect to social media. Mobile is the way to go and as Jason Nkoju puts it in his report titled the rise of bots, Nigeria now has about 16 million Facebook users and another possible 18 million on Messenger and this is up about 250 percent from two years ago according to IT News Africa. In Jason’s report he predicted that the following to happen in the Nigeria tech sector in five years;

Believe it or not, Chatbots are the future for the world and in the Nigerian parlance; we no dey carry last so thank Jide for this great idea.

AWS re:Invent: Voice Recognition For Call Centres And Voice Print Among Others

How To Create A Business App For Android

What Does ‘Low-Code’ Mean For The Future Of App Development?