Throughout the year, there has been news that the federal government of Nigeria would increase the tax it already collects from the ICT sector by 9 percent. This has been greeted with criticism by industry experts who argue that such a tax is capable of making internet access unavailable to majority of the population. The tax is also capable of jeopardising the ambition of the country to have a broadband penetration rate of 30 percent by 2018.

That said, The Punch reported yesterday that telecom subscribers would pay more for data from December 1st which is tomorrow actually. The telecom companies haven’t officially commented on this yet but sources within the sector told The Punch that “The NCC issued the directive late last week on the orders of the Federal Government. We have not announced it yet because most of the major telcos have been meeting the NCC on how to reverse this policy, because it will be too harsh for Nigerians. “However, we further gathered that the Federal Government took the decision having discovered that data rates are very low-priced in Nigeria, compared to other countries, including nearby African countries.

“The government might have also taken the decision given that Nigerian subscribers have been kicking against the proposed nine per cent Communication Tax, whose bill is currently in the National Assembly.”

This means that instead of buying 1.5GB of mobile data at 1,000 Naira, you will now pay 3,000 Naira instead and this means the new price would 1,000 per 500MB. MTN we are told has complied with the directive by notifying customers of the changes in data costs from tomorrow.

Other sources in the industry though have tried to dismiss this by saying they haven’t seen such directive from the Nigerian Communications Commission (NCC).

Now this all comes as the bill to impose a 9 percent tax on telecom services has been met with resistance and now it looks like they may have found a way around this. Increasing the cost of a service by 200 percent may very defeat the purpose of making Nigeria the tech power house of Africa. 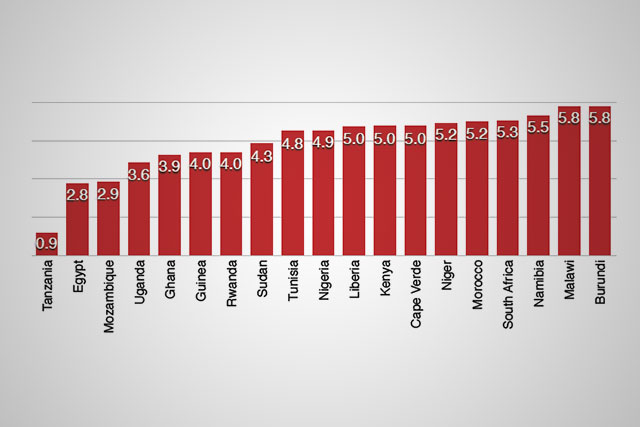 In the chart obtained from My Broadband South Africa, Nigeria ranked 10th with respect to mobile data cost in Africa as of September 2016. Fast forward to December 1, the cost has been increased by 200 percent which means an updated chart could have Nigeria well below expectations on that same chart. If we also take the Naira-dollar exchange rate into account, it could be worse. All of these come at a time when Nigerians are facing a deep recession which has seen the cost of almost every basic commodity go up as a result of the double digit inflation that’s currently bedeviling the country now.

Right now, the country needs palliative measures in the ICT sector that will spur growth and not the other way round. So here’s a scenario.

This morning, a developer is on his way to work or simply walk to the desk they work from in their residence. This set of people depend largely on internet services and in many cases, the vast majority of them rely on mobile data. As the cost of acquiring this changes, the customers who depend on these developers have to pay more in one way or another.

The other scenario is that the holiday season is now upon us. Now look at what happened in the US just last week. Thanksgiving, Black Friday and Cyber Monday sales figures have been released and it is astonishing. For the first time, online shopping crossed the $5b mark and mobile devices connected to the internet played a huge role. “More than $5 billion ($5.27 billion) was spent online by the end of Black Friday, a 17.7 percent increase year-over-year (YoY). Black Friday set a new record by surpassing the three-billion-dollar mark for the first time at $3.34 billion (21.6 percent growth YoY) while Thanksgiving accounted for the remaining $1.93 billion. Black Friday became the first day in retail history to drive over one billion dollars in mobile revenue at $1.2 billion, a 33 percent growth YoY”

This was possible because of the availability of internet services. The US has a near 85 percent broadband penetration rate and while this is not the highest in the world, it means that majority of the over 320 million Americans have access to not just internet but broadband services and when you put that with an improving economy and high consumer confidence levels, the result is what happened on Black Friday.

Nigeria has a high youth unemployment and a recession and more investment is needed especially from small businesses to change this. Increasing tariff may not be the way to go in a recession but again, the argument from the government side is that they need more revenue to invest in other sectors that could lift the country out of recession. In any case, it looks like we’ll be paying more for data from tomorrow.