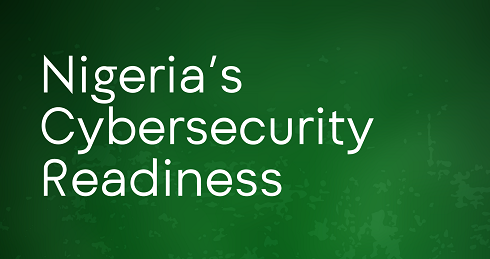 As technology and the internet continues to evolve, the world is rapidly becoming a global village with almost everything running on the cyber space, affecting most aspects of our lives, enabling growth, dismantling barriers to commerce, and allowing people across the globe to communicate, collaborate and exchange ideas. With this great success, comes many challenges as hackers are becoming more sophisticated by the day with a spate of attacks.

World Bank’s statistics in 2015 states that over 47.4% of the Nigerian population use the internet, clearly this rate should have increased by now. With the increased rate of cyberattacks, it is expedient to analyze our readiness and consider the cost in terms of value that will be lost as result of an attack.

This paper attempts to analyze the readiness of Nigeria on cyber security. Bearing in mind that ‘cyber-security’ may not necessarily be a new terminology in Nigeria’s Information Technology ecosystem, an analysis of its readiness is most crucial at this point especially owing to the fact that a detailed plan and strategy called the ‘National Cybersecurity Policy/Strategy’ has been drawn out.

Going back in time, Nigeria could safely be assumed to be one of the most peaceful nations of the world in terms of terrorism. Then came the cases of terrorist attacks that have skyrocketed into an unimaginable state even up to the level of being blacklisted as a terrorist nation. The erstwhile president, Goodluck Ebele Jonathan, in July 2014 admitted that the intensity of terrorist attacks took the Nigerian government and security agencies unaware.

The unfortunate reality now, is a new terrorism attack gradually brewing around the world with more sophisticated weaponry. This attack may not be a close combat as with Boko-Haram, but can be comparable in the cyber space context. Just as how the ‘Boko-Haram’ terrorist attacks could not be imagined to be the fate of Nigerians, evolving to the stage of participating in high-scale cybercrimes in Nigeria still feels like a level we cannot get to.

The financial sector has been reported to be the most IT driven sector into the country. Little wonder the most pervasive crimes in the country till date remain electronic fraud using ATM cards and electronic banking platforms. The Nigerian financial sector losses an estimated $450m to digital fraud and with the move to a ‘Cashless Society’, cyber-predators are lurking just around the corner.