Can Bluetooth signals be converted to Wi-Fi? If you’re familiar with both technologies you’ll know that this may sound impossible at first but this work by some researchers at the University of Washington in the United States has done just that. Before we go into details, both operate on different standards which make one unique from the other. Bluetooth transmits data at speeds of up to 25mbps while Wi-Fi can be up to ten times that value. With respect to frequency, Bluetooth operates on 2.4GHz while Wi-Fi based networks operate on 2.4, 3.6 and 5GHz. As a result, power and range of signal reach greatly differ in both.

Where C = is the speed of light and is constant at approximately 300m/s,

f= stands for frequency of cycle per second

the higher the frequency, the lower the wavelength but it seems in practice that Bluetooth based wireless signals can travel as far as 30m while Wi-Fi signals can be extend three times more. Something then has to make sense if the formula contradicts itself, its power. Wi-Fi consumes more power than Bluetooth obviously. But a lot still more questions may be on your mind like interference and all that but that was explained in the research.

The research titled “Inter-Technology Backscatter: Towards Internet Connectivity for Implanted Devices” looked into converting Bluetooth signals into Wi-Fi which allows embedded devices (body implants) to communicate easily with devices outside the body for effective monitoring of conditions like blood sugar, salt levels and blood pressures. This kind of technology has the potential to go a long way in preventing and possibly curing some of the diseases of our time. Like a Microsoft research aims to fight diseases using Bing search, this research aims to use better signal communication techniques in fighting diseases in the future.

The Source: Bluetooth signals. “The high level idea is to transform a Bluetooth chip into a single tone transmitter, i.e., with constant amplitude and frequency. We leverage two insights about GFSK modulation used in Bluetooth. First, Bluetooth uses two frequencies to encode the zero and one data bits. Thus, if we could transmit a stream of constant ones or zeros, we create a single frequency tone. Second, passing a single tone through the Gaussian filter used by Bluetooth does not change its spectral properties since the filter only smooths out abrupt changes to the frequency.” In English, the Bluetooth signal transmitter sends a constant sequence of either ones or zeros (please take note of the “either”) so as to achieve white noise and that’s where the either I said you should take note of comes in play. White noise put in very simple terms can be the sound you get from rain on your roof. It happens all at once with equal intensity no matter what part of the house you are in. So in engineering terms, it’s the noise that happens at uniform frequency and that’s what the researchers were able to achieve by transmitting at either ones or zeros.

The next phase is data whitening which so the receiver can make a sense of it all. “Bluetooth uses data whitening to avoid such sequences so as to enable accurate timing recovery on a Bluetooth receiver.” After this, assuming the whitening algorithm used in the whitening process goes as planned, the move on to structure the newly received packets 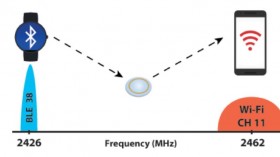 This leads us to the main line of subject here which is generating the Wi-Fi signals from the processes described. It’s called backscattering. Signal backscattering uses existing radio (in this case Bluetooth) to transmit data without power. Based on this definition of backscattering, devices implanted in the body can pick up these signals and if you’re wondering how it just got the point of becoming Wi-Fi all of a sudden, well the backscattering process allows the newly structured Bluetooth packets to hop into one of the Wi-Fi frequencies using the process of modulation in line with the IEEE 802.11b standard which Wi-Fi uses.

For those familiar with modulation which in this case just means changing the properties of the Bluetooth signal into the eventual desired signal for transmission (Wi-Fi), here is what they did,

We transform the payload of 802.11g packets into AM modulated signals. In 802.11g, each OFDM symbol is generated by taking an IFFT over QAM modulated bits to generate 64 time domain samples. Fig. 7 shows a time-domain OFDM symbol created from random modulated bits, which we call random OFDM. We also show the symbol created when the IFFT is performed over constant modulated bits, which we call constant OFDM. The figure shows that while random OFDM symbols have the energy spread across the time samples, in constant OFDM the energy is in the first time sample and is zero elsewhere. This can be used to create an amplitude modulated signal. Constructing a constant OFDM symbol using Wi-Fi radios is however not straightforward due to scrambling, coding and interleaving. Next, we describe how to to achieve this goal.

OFDM stands for orthogonal frequency-division multiplexing and is one of the many modulating methods you have available in telecom.

IFFT stands for inverse fast Fourier transform and just a warning, it’s got a lot of mathematics involved.

Back to the practical world, the research was tested successfully by carrying out the process described above from Bluetooth signals from a transmitter and allowing a Samsung Galaxy S4 phone with Wi-Fi capabilities to pick up the new signals as Wi-Fi at ranges of more than 24 inches.

Applications include smart contact lens which measure biomarkers like glucose, cholesterol and sodium in tears that can help with unobtrusive tracking for diabetic patients. The lens consists of a miniature glucose sensor IC, and an antenna. Although the power required for glucose sensing is minimal, real-time communication is power consuming and rules out conventional radios. Today these systems are limited to periodically sampling and storing the glucose data that is then transmitted sporadically using backscatter whenever the lens is next to a dedicated, powered, RFID-like reader.

Other applications include implanted neural recording devices and card to card communications.

Like other related works, it can be improved and with optimisation, overall performance can be better with the potential to create a better way of interacting with embedded devices. Another thing we could see springing out of this a whole new set of startups that may want to focus on creating apps for this purpose in future.

The research was carried out by Vikram Iyer, Vamsi Talla, Bryce Kellogg, Shyamnath Gollakota and Joshua R. Smith all of the University of Washington. They are Co-primary Student Authors

President Trump To Outrightly Ban TikTok In The US, May Not Let Microsoft Buy It

Is It Safe to Delete Everything in Windows Disk Cleanup?