Lite a small version of an application, which is data friendly and can allow one have full access of an app with a very low data cost , other App such as Messenger, Twitter and a list of others have their app lite.

Skype has their too which is called Skype Lite , the app earlier announced a new feature called SMS insights and these feature will allow  users make the App as their SMS default in their settings and also enable the app send , receive and organise their text messages.

The SMS insights feature will help fish out and organise the messages on the user’s phone message according to online order, promotional messages, Telecommunication messages, upcoming bills, finance message from banks, personal messages and lots more.

According to Microsoft’s blog post, “The new feature will make the SMS box smarter on the smartphones with automatic message sorting under different categories like Finance, Shopping, Travel, Reminder, and Promotions, helping users take an action from within the app.”

How the App works. 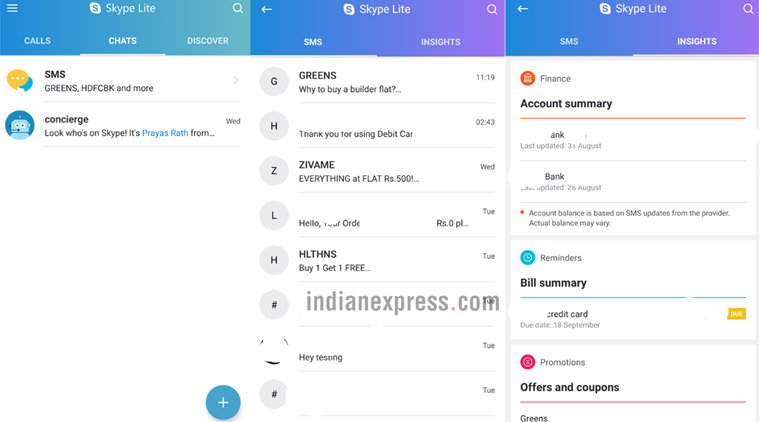 Skype lite, the feature will arrange all SMS in one tab and arrange all the insights in the other tab giving it a proper breakdown of all incoming SMS , flight check in, promotional message , customers care messages and a list of other.

However, before the user have experience  to these feature , the users must have the app already installed in their phone and also make skype Lite a default App on their Android smartphone and then give or allow the App to access the user messages and arrange them in categories.

Till date Skype Lite has been the smallest App that was launched by Microsoft earlier this year, and this feature comes in different categories such as shopping category, online banking messages category, promotion category.

Microsoft said this feature is still a work in progress as users will not be able to delete message from this app feature until they switch back to their previous SMS default that came with their phone and that this App is limited to just Android users.

The App is safe and well secure as Microsoft says all “SMS classification and categorisation happens locally” on the phone itself” and the company does not have access to read any information on the user smartphone.