Late Wednesday, Twitter released a report showing what’s become a very familiar story in Silicon Valley: That its workforce is mostly white and mostly male. By the company’s own admission, Twitter has “a lot of work to do.” Seven out of 10 employees there are men.
(Twitter)
Meanwhile, nearly two-thirds of Twitter is staffed by whites. Asians are also dominant, accounting for 29 percent of employees. 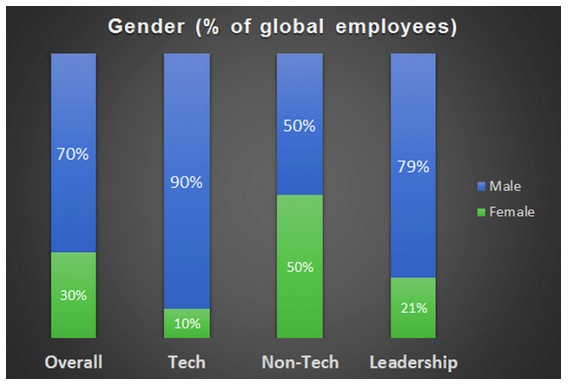 (Twitter)
This matches a lot of what we’ve seen at other companies lately, from Google to Yahoo to Facebook to LinkedIn. The reports all speak clearly and transparently about the need to become more inclusive — not just when it comes to gender, but also to race. At Google, for instance, only 2 percent of employees are black and 3 percent Hispanic.

There is a another story in the data that’s less apparent, though, and it’s about class. We don’t typically talk about class as it relates to tech companies, because tech tends to be a lucrative field in its own right and engineers make a lot of money. If anything, tech employees have borne the brunt of the criticism in connection with San Francisco’s skyrocketing housing prices, or the exclusive corporate shuttle buses that wind their way through the city during rush hour.

Still, the data show that there’s a big gap between the executives at the top of the pyramid and those who actually make the machines go.

This is true for Twitter, but also at Yahoo, where women account for 37 percent of the workforce but only 23 percent of leadership positions. Whites make up only 50 percent of Yahoo’s U.S. employees, but as much as 78 percent of its U.S.-based leadership.
Asians make up more than a third of Facebook’s overall workforce. Yet only 19 percent have made it into senior-level positions.

Why should we care whether the top level leadership looks like the rest of the company? For the same reasons that people care about a company’s diversity overall: Different experiences and value systems help counter groupthink. Homogeneity at the top conditions people to act in certain ways that might seem mystifying to outsiders.
To the extent that technology companies are becoming a more important part of the economy, society has an interest in making sure that those companies are reflective of the customers they serve. As Google puts it in its own reporting: “Having a diversity of perspectives leads to better decision-making, more relevant products, and makes work a whole lot more interesting.”

That goes for companies that also have an overabundance of some demographics. It’s impossible to talk about these companies’ diversity reports without discussing their disproportionately Asian workforces. Census data show that Asians account for less than a quarter of the Bay area population. Yet Asians represent 39 percent of Yahoo’s U.S. workforce, 34 percent at Facebook, 38 percent at LinkedIn and 30 percent at Google.
Asian-Americans have long lived with the perception that they’re the model minority; in this case, the numbers appear to reinforce that idea. Asians far outnumber their black or Hispanic counterparts.

But the data also show that there are limits to the stereotype; Asians are just as subject to the leadership ceiling as everyone else, if not more so. The fact that there are so many Asians at tech companies simply masks that point. That “bamboo ceiling,” as some have called it, is largely invisible precisely because Asians seem to be doing so well for themselves already.

What’s more, Asians’ preponderance in Silicon Valley jobs does little to dispel the idea that Asians are naturally better suited to those tasks, or by contrast, more poorly suited to jobs in other industries. The impression is only reinforced when you consider that in other aspects of U.S. life, Asian-Americans are largely absent. Just look at Congress, which has 44 black members and 37 Hispanics but only 13 Asians. Or the Cabinet, which has none.

As a Chinese-American male who’s neither an engineer nor a scientist, I confess to some amount of bias here. Still, you don’t need to be of Asian descent to see how a lack of corporate diversity cuts in many directions, at every level.