Home General Government This Hospital In The US Employs Virtual Treatment Techniques. Should African Nations Learn From This?
Share

Mercy’s Virtual Care Center is a hospital located outside of St. Louis in the United States that has come up with a way keeping costs down. According to a CNNMoney report on the story, instead of patients coming around to the hospital often, staff would rather place calls to patients using highly sensitive two-way cameras — and monitor their vital signs in real time through tools like pulse oximeters that plug into an iPad. The aim they say is to benefit both patients and hospital by avoiding the hassle of patients coming to hospitals for reasons that could easily have been handled using modern technology while reducing the burden of patient readmission in the US which costs an additional $41.3b annually. 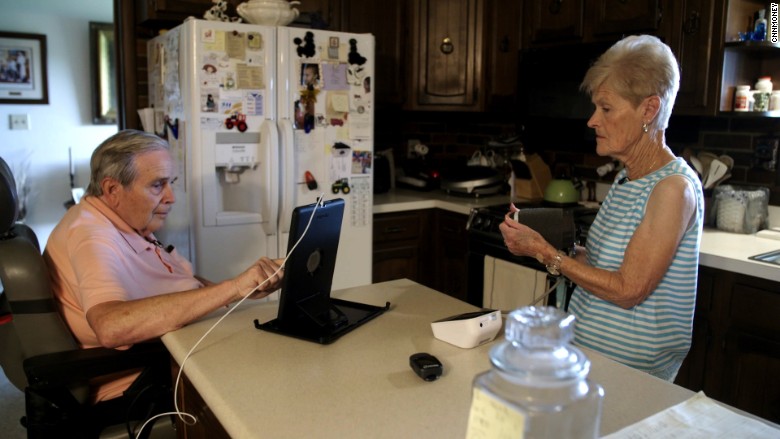 According to the Centers for Medical and Medicaid Services (CMS), U.S. health care spending grew 5.3 percent in 2014, reaching $3.0 trillion or $9,523 per person.  As a share of the nation’s Gross Domestic Product, health spending accounted for 17.5 percent. So you can understand the problem and why this initiative might he timely.

“The sickest 5% of patients are typically responsible for about half of the health care spent and many end up, unnecessarily, back in the hospital,” Gavin Helton, the medical director of Mercy Virtual Care, told CNNMoney. “We need an answer for those patients.”

Mercy says the Virtual Care Center, launched in October 2015, is the first of its kind: a $54 million, four-story “hospital without beds” that houses zero patients. It’s home to a variety of “telemedicine” programs that allow Mercy to care for patients remotely round-the-clock.

A new Mercy Virtual pilot program is focused on remote care for patients in their homes. The initial pilot includes 250 patients with complex chronic illnesses.

They went on to give the example of an 80 year old man who suffers from cardiac problems and is recovering from stroke. His 59 year old wife connects to an equipment like blood pressure cuff (or any other one for that matter) to an iPad which displays results that medical staff now use to access health conditions. This is not to eliminate the emergency room or hospital visit completely but rather a way cutting costs on treatments and consultations that could have been easily carried out without patients coming to the hospital.

But with innovations like this comes resistance as well. The report acknowledged that some still don’t welcome the idea of a virtual treatment centre who would rather talk to someone face to face. But with time, seeing as governments are seeking new ways to fund projects in light of a growing global population, everyone would eventually get onboard.

According to Research Gate in a report titled “Shortage of Healthcare Workers in Developing Countries—Africa”, Africa has 2.3 healthcare workers per 1000 population, compared with the Americas, which have 24.8 healthcare workers per 1000 population. Only 1.3% of the world’s health workers care for people who experience 25% of the global disease burden. Due to economic and other health infrastructure conditions for example in Nigeria especially in the past, there was a migration of medical personnel from Nigeria to Europe and America and this has in turn created a shortage of good doctors back at home. But seeing as the population is growing and is projected to reach 430 million by 2015 in Nigeria, should governments make virtual healthcare centres a real thing in Nigeria and Africa by extension?

First let me start with why governments on the continent should probably start planning towards this especially for the younger generation who may not be as sickly like the older people. It is projected that by next year, there will be nearly 400 million smartphones in Africa primarily powered by more affordable Android based brands that have flooded most of the continent. This then means that the internet literacy rate is rising to the point where smartphone demand is up and is expected to keep going up. You see according to a 2012 national youth survey in Nigeria which is the most populous in Africa, people in the 15-35 years of age were about 70 million out of a total population of 166 million at the time and of this number, 54 percent were said to be unemployed. So there is an opportunity here for whole new industry on the continent. Across the continent the story is no different because in a UN report, it says there are about 200 million people aged 15-24 and this was based on a total population of 1 billion in Africa.

When you put together the number of beds per 100,000 people to available doctors in Nigeria and that’s public and private health care institutions, it was about 39:100,000 in 2010. This has in turn had an adverse effect on life expectancy rates.

Anyway, behind this problem lies a potential new era of healthcare delivery when you match the bad news with the good news of more people owning smart devices. More doctors graduating today have are also tech savvy and this could be explored further for health care delivery to rural areas.

What needs to be done?

The other side to it is that governments need to invest more in broadband and make it easier for citizens to access those services easily.  Another way of doing this could be partnering with the likes of Facebook to expand the Free Basics service beyond what it is now. Seeing as healthcare is a basic need, people should be able to access data that could in turn be of use to them. You see Facebook is partnering with Airtel Nigeria to bring some essential services to offline services to some users in line with its internet.org vision. Some of the patients in the hospitals do not need to be there in the first place considering the high cost of transportation these days in Nigeria and the additional risk of travelling. With good broadband services and ready doctors of curse with some sensitization, this could well become a real thing in Nigeria which is experiencing budget cuts even in the already starved health sector.

More research is needed in this area for this to eventually become a reality though.

Expect challenges too because according to the CNNMoney report, there’s some resistance even in a technologically advanced nation like the US.

In the report though, the Virtual Care program is credited with a more than 33% decrease in emergency room visits and hospitalisations since last year’s launch. If it works there, it can work on the African continent too.

Also see my article on deregulation of the oil sector in Nigeria and how a set of new tech startup companies could be born out of this.