Home Gadgets A Peek Into The World Of The “TOUGHBOOKS”, What They Look Like And What They Are Used For 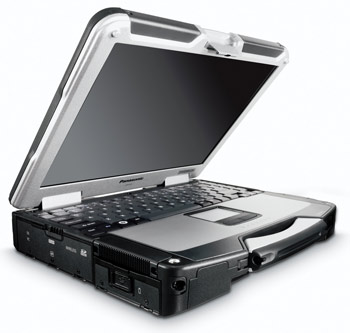 For most people, choosing a laptop is all about “graphics, efficiency, long-lasting battery life and durability”. If most people are asked to give a better insight into what they are actually looking out for in a modern laptop, they come up short. The modern laptop is shoved through the day to day hurry that we go through; for most people, this means exposing the laptop to a variety of extremes like temperature, humidity, occasional drops, and sometimes having to carry it in the rain. While modern laptops are built to withstand at least a standard amount of exposure, once push comes to shove, our day to day laptops tend to give way and cannot go with us that extra mile out of a “conducive” business environment.

When a laptop is likely to be subject to lots of bumps, spills and knocks, then durability tends to be a major factor. This is what has brought about the advent of “rugged” laptops. As with everything in life, some laptops are more rugged than the others and for good reasons.

When a device is said to be rugged, it means it’s ready to face challenges above and beyond those you’d expect a ‘regular’ laptop to face. But how do you measure ruggedness of a device? The US Military, which cares how much abuse a device can take, has set a standard — MIL-STD 810G — as a guide to determine how rugged or durable a device is likely to be. It is based on a set of 28 tests that range from extreme temperatures to gunfire. The MIL-STD tests vary depending on the size, weight, and intended use of a device, so a laptop doesn’t need to go through all the tests to be certified. Laptops, when tested, generally go through eight to eleven MIL-STD tests such as High Temperature, Low Temperature, Rain, Humidity, Sand and Dust, Immersion, Vibration, Shock, Solar Radiation etc.

When it comes to Ultra-rugged Laptops you can dunk it in water, drop it from a height, or bury it in the ground … ultra-rugged laptops are built from the ground up to handle severe treatment and harsh conditions. Each component is purpose-built for durability, so they inevitably meet high military-grade specs, and are most often used by the military, fire fighters, police officers, and other users who encounter harsh or hazardous conditions. It is not unusual for ultra-rugged laptops to withstand 70 mph (almost 113 km/h)winds, 6 inch of blowing rain for an hour, extreme temperatures, drops from 6 feet more than 26 times … and all that while delivering battery life up to 27 hours. These are not your everyday laptops!

If you need rigorous performance in the field or while travelling, many standard laptops go through a process known as ‘ruggedization’. For example, hard drives can be gel-mounted or protected by shock-absorbing dampers, and keyboards can be made spill-proof. Ruggedized laptops are often made of magnesium or aluminum alloy which is tougher than plastic, and can withstand falls from up to 30 inches.

But for most of us, a ‘business-rugged’ laptop does the trick. You might call these ‘stylishly-rugged’ machines since they’re made for typical business executives on the move. Built to higher standards, these laptops generally feature spill-resistant keyboards, sturdy internal frames, and wear-resistant exteriors. These are not waterproofed or ideal for field work, but they’re built to withstand spills and knocks that commonly happen, and they can even survive a fall off a desktop. They may be somewhat heavier than regular laptops, but they provide a high level of durability.

Some laptops offer semi-rugged or business-rugged durability without compromising on style and affordability, a further look at these kinds of laptops will be provided subsequently.