…sex tech is coming and there’s a choice to be made.

Granted, many sex-tech innovations feel gimmicky, and this could all just be a fad. But given our reliance on technology for pretty much everything else in our lives, maybe it’s time we broaden the digital sphere to our bedrooms. Or not. Like it or hate it, sex tech is coming and there’s a choice to be made.

Dunham is one of a growing list of geeks putting the G in G-spot. She worked at Apple for nine years before founding the company with her husband, Brian, after experiencing the frustration of being apart. “He used to travel a lot, and we thought, ‘Wouldn’t it be great if such a thing existed?’ So we created it,” she says.

Autoblow 2
Phone sex could also be a thing of the past, thanks to Glance. This Google Glass app being developed in London allows couples to see what the other sees, from their point of view, in real time.

Consenting adults should be able to have whatever kind of sex they want.

Of course, you don’t need a partner to have fun. Take the Autoblow 2, an oral sex tech toy for men that surpassed its initial crowdfunding goal of $45,000 by 600 percent and has already sold more than $1 million worth of product.

“Consenting adults should be able to have whatever kind of sex they want, with whoever they want, regardless of the body they or their partner were born with,” says Laura Parker, co-founder of the New York Toy Collective. “Our most popular product is Shilo. It’s made of silicone, could be worn under clothing either for gender expression or for convenience and then be used for sex. Also called a ‘Pack and Play.’ ” 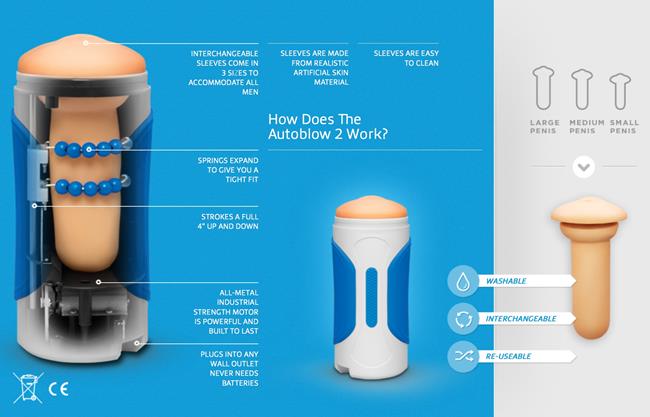 The Toy Collective also makes on-demand replicas of your bits. And for those who own a 3-D printer, the site MakerLove offers all types of free sex toy designs for downloading.

Therapists worldwide are witnessing an increase in … people … with out-of-control sexual behavior.

Of course, all these mechanical sex toys and VR adult movies come with a high risk of addiction. “As technology increases people’s ability to access intensely stimulating sexual imagery, therapists worldwide are witnessing an increase in the number of people walking into their offices seeking help with out-of-control sexual behavior,” says Robert Weiss, a clinical social worker and co-author of Closer Together, Further Apart.

Self-tracking wearables are also moving from our wrists and venturing down south. Smart insertables like kGoal help women train their pelvic floor with games, and there could soon be a counter, sort of like a pedometer, for the penis.

Yes, you read correctly. It’s called SexFit. The smart-ring, being developed by British sex toy company Bondara, will tell you how many calories you’ve burned, help you improve your rhythm with LED lights and even give you a score you can share on social media. (Please don’t.)

It’s a brave new world of sex out there, but are we ready for it mentally? Probably not. “Technology always moves faster than ideology,” explains Tina Gong, the creator of the HappyPlayTime app, which has been banned from Apple’s App Store for being crude. “We have to push ahead now and people will catch up.”

If so, we might need to hurry up because, at this pace, we could soon be having sex with robots. The R-rated game Sext Adventure already allows users to exchange naughty messages with a robot in real time. And the developers of FriXion are working on getting their sex device to interact with just a movie or a computer avatar.

No ones knows whether all this innovation in the bedroom will make us sexually enlightened or lead to a dystopian future where humans give up on biological sex. But the second seems less likely.

After all, analog sex — remember it? sex with a live, consenting, adult human — is already pretty darn awesome. As Seth, the founder of FriXion, says, “If a robot can give you more pleasure than a human, maybe the human should be trying harder.”