Home General Google Search Has Been Accused Of Racial Bias In The Past. We Look At It From An African Perspective In This Report
Share

There was an outcry some weeks ago by some who say they typed in an item into the Google Search engine and were surprised by the results. According to USA Today, “Kabir Alli, an 18-year-old graduating senior from Clover Hill High School in Midlothian, Va., posted a video clip on Twitter this week of a Google image search for “three black teenagers” which turned up an array of police mugshots. He and friends then searched for “three white teenagers,” and found groups of smiling young people.“I had actually heard about this search from one of my friends and just wanted to see everything for myself. I didn’t think it would actually be true,” Alli told USA TODAY. “When I saw the results I was nothing short of shocked.”

This has led people to call Google all sorts of names from deliberately tweaking search results to being a racist platform. This went viral online last week with civil leaders calling on Google to do something about changing how these results are displayed when people make related searches. For example “UCLA information studies and African American studies professor Safiya Umoja Noble says society should not let Google off the hook so easily.

Well in the midst of all these, I decided to bring this search home to the African continent to see  for myself. The first thing I did was to change the google.com.ng default search because of my current location which is Nigeria to google.com  which is universal and this doesn’t mean it will adversely change search results as it just means you get more regional tailored content in search result before links from other regions. It’s just a question of  content priority in light of billions of search results so in any case, I used google.com. You can change this at the bottom right hand of the Google search page where you see “Use Google.com”. Another advantage of using google.com.ng is that you can actually see results in any of the major Nigerian languages should your prefer that.

A search for “Nigerians” gives you the image below; 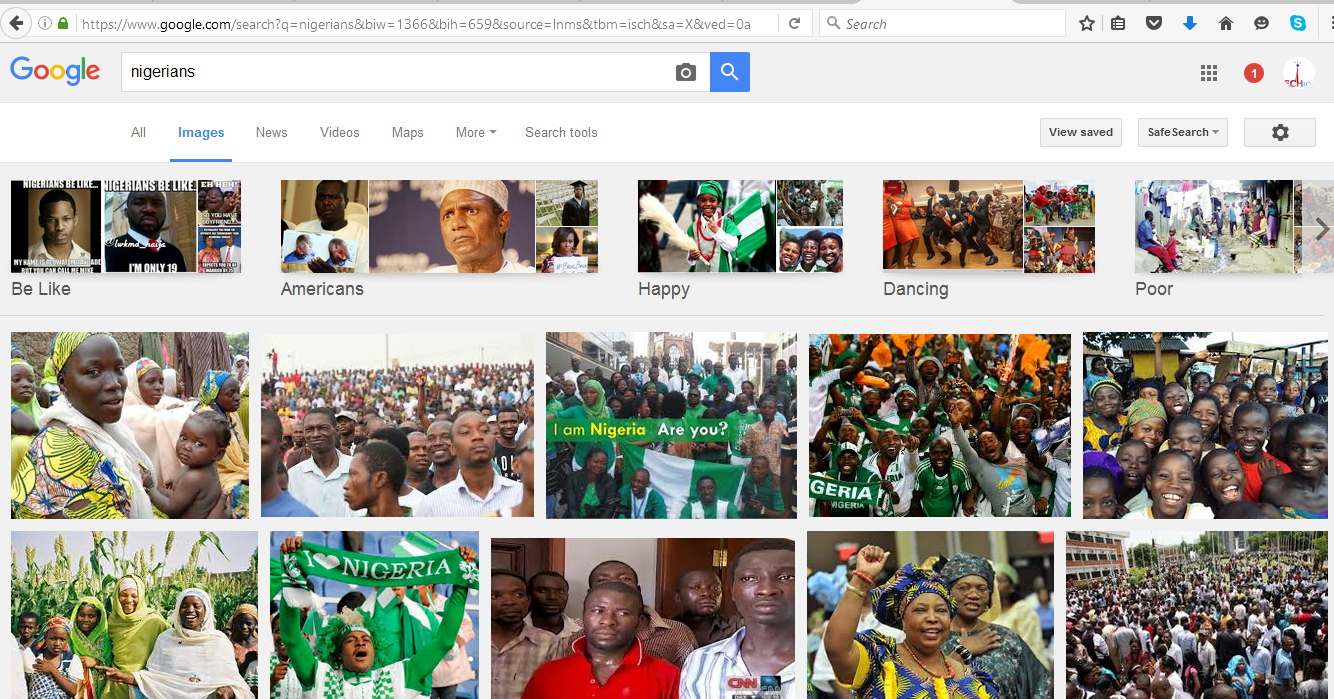 A search for “South Africans” gives you the image below;

While the search results might appear okay to say the least, you’ll notice some slight and peculiar differences in the way the results are published by Google. Take the Search for “Nigerians” and “South Africans” for example, take a look at the top five categories. While in the South African categories, you see terms like famous and beautiful, in the search by category section of Nigeria, you see terms like poor, be like and Americans and  in the American category, you see faces like those of Sen. Ted Cruz who has been known for openly likening Nigerians to fraudsters and then Pres Obama, Michele Obama and other Nigerian American faces. Now the purpose of this article is to shed some light on discriminatory search results as alleged by some.

I went further and entered the search terms  two Nigerians and two South Africans into Google Search and here the disparity even grows more obvious.

The Nigerian search result obviously produces results of Nigerians at home and abroad who are being held on criminal charges. There is almost no picture on the first three rows that tells you otherwise. The moment the search is made, its basically Nigerians and the law at home and abroad. This goes on and on when you search for “three Nigerians” and other related subjects.. But just as the case of the black American teenager, could Google be so wrong? Well let’s see what an image search on Google’s competitors produce.

What other search engines are saying

The story is not that different when it comes to other search engines with the exception that Yahoo’s top display of search item “Nigerians” produces some “more friendly” images but as you scroll down, this begins to change into something a bit more familiar  to what you see on Google.

Perhaps Bing search for the words “Nigerians ” and “South Africans” align a bit more closely.  But as we’ll see later, Google still leads search engine visits both in the United States and internationally and this could be a factor why you might see slightly different images from other search engine results which may look similar.

When you do an Image search on Google, hover your mouse on any images of interest and you’ll see how that image got to Google in the first place. When I did it, I discovered that a majority of the results come from some of the mainstream news outlets in Nigeria. You see Google doesn’t create content, people create them and Google only redirects you to those websites each time you click on any images. The same principle goes for Bing and Yahoo search engines just in case you were wondering.

So the accusation continues in the USA Today report by the UCLA information studies and African American studies professor Safiya Umoja Noble who  says society should not let Google off the hook so easily.

The professor is basically saying Google should change their algorithm to become more aware of sensitive topics. Google had last year apologised last year in a “racism” blunder when its Photos app mistakenly labelled a black couple as being “gorillas.” Google responded by saying “We are taking immediate action to prevent this type of result from appearing.”

Google continued by saying “there is still clearly a lot of work to do with automatic image labeling, and we’re looking at how we can prevent these types of mistakes from happening in the future” according to the BBC.

That’s the basic way this is done. It then means that much of these contents come from websites created by others and are eventually indexed by Google. Another reason why you see what you see is the frequency of visits from users. It all depends on what people are searching and from where they are searching from. Also the number of people visiting such pages per day. I mentioned earlier that when you hover your mouse on many of the image search results in the “Nigerian” category, you’ll see that many of these images come from well visited Nigerian websites like Bella Naija, Linda Ikeji and Nairaland. Can we then blame Google for the results we see? I’ll let you be the judge of that.

Google search use compared to other search engines

In technologically advanced countries in Africa like Nigeria where Google search engine recorded a 93% control last year, the story is pretty consistent across board. In Egypt for instance, it was 96% for Google against Yahoo’s 2.3% in 2014.

When it comes to browsers, Google still leads. Google accounts for about 67% of searches from US devices while the Microsoft comes a distant second at 20% and Yahoo about 10%.

Google could do more

When you visit Google’s own site where you can see the official search engine story, it says the algorithm constantly changes.  “Our algorithms are constantly changing. These changes begin as ideas in the minds of our engineers. They take these ideas and run experiments, analyze the results, tweak them, and run them again and again“.  A lot more can be done to create more sensitive algorithms to make search results more acceptable by many.