It seems like after the launch of Google’s latest Android OS 8.0 Oreo, majority of people are still not aware of its existence or are yet to get a device with the new operating systems in it and as shown according to report, the percentage on the monthly data mapping distribution of versions of mobile OS is low and is currently running on 0.2 per cent devices in the market. 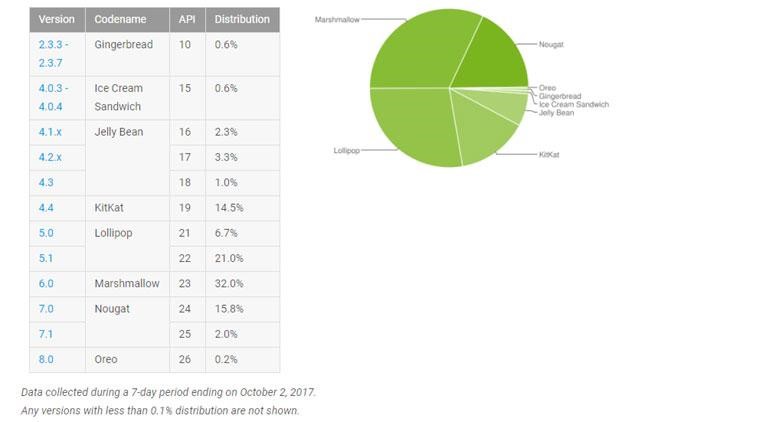 Android Marshmallow , the two and half years old operating system continues to dominate the Android data charts , which shows that many devices are still running on the old OS and are still unlikely to get updated to the new Android Oreo 8.0 or the previous Android Nougat on their Android devices.

Android Oreo is available for Google pixel 2, pixel XL, Nexus devices, Sony Xperia XZ1 and a list of other OEMs, and manufacturers are still working to add the new update in their devices and as stated in the report, Android Oreo could start running on most devices by the time Android P is officially launched.

Although, Apple’s iOS 11 according to report is currently running in over 25% of Apple devices just after few weeks of its launch which is far impressive compared to Android Oreo running on just 0.2 per cent on active devices.