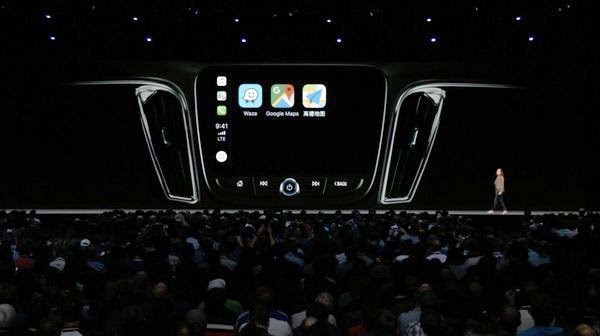 Since Apple CarPlay launched in 2014, Apple iOS users have been forced to use Apple Maps for navigation. That will finally change with iOS 12, which allows users to pick whatever third-party mapping apps they wish to use for navigation.

Apple announced that iOS 12 would bring third-party navigation support to Apple CarPlay and briefly displayed CarPlay dashboard interface with new icons for Waze, Google Maps and Chinese navigation app Autonavi Navigation. It’s unclear whether these will be the only apps supported, but that’s a solid third-party starting roster.

Apple CarPlay is automotive integration software that allows users to interact with supported applications for audio streaming, communication and, of course, navigation on the dashboard displays of compatible cars.

The app is  an Apple’s in-car interface for iOS. In many new cars — or older cars with newer head units — you can plug in an iPhone (or Android phone) and have a version of the phone’s apps pulled up on-screen. It’s a major convenience since your phone is going to know a lot more about you and be connected to a lot more services than your car is. Plus, carmakers are just never going to be as good at making user-friendly software interfaces as phone designers.

CarPlay also gives iPhone users in-car access to Apple applications such as Apple Music and iMessage, along with non-Apple apps such as iHeartRadio and Spotify

CarPlay and Android Auto are becoming a standard in all the latest cars, allowing users to turn the car dashboard into a familiar interface with preferred apps. Apple, however, wasn’t feeling quite as open when it released CarPlay back in 2014, offering users navigation only with Apple Maps. Although Apple Maps is well regarded in the area, there are many drivers who have grown fond of other options, such as Waze or Google Maps.

This is indeed a welcome news for those who are not fans of Apple’s own mapping solution. The company has come a long way since Apple Maps debuted in 2012, but the app is only available on iOS and MacOS. Google Maps and Waze, meanwhile, are also available on Android and are the superior options to most people.

The iOS 12 beta program is readily available for download for developers, but if you are curious then you can give it a shot. The software will go live in September 2018 and should support Apple CarPlay new third-party maps system.