Home General Government As The US And UK Ban Electronic Items In-Flight For Safety Sake, Here’s The Downside
Share

The US banned some electronic items on flights from certain airports in Africa and the Middle East this week and just hours after that, the UK made a similar announcement with the only difference being that the UK added two of its airlines (British Airways and Easy Jet) to the list. The United States has excluded American airlines from the new regulation which takes effect this weekend.

The big news here is that henceforth many passengers traveling to the US will have to check in their iPads and other tablets as well as laptops. But there is a potential problem with that too.

Many of today’s tech gadgets run on lithium batteries which authorities fear can explode in-flights but how about such explosions at the bottom of the plane which is actually closer to the fuel tank and in a more clustered place where you have luggage that can easily catch fire? 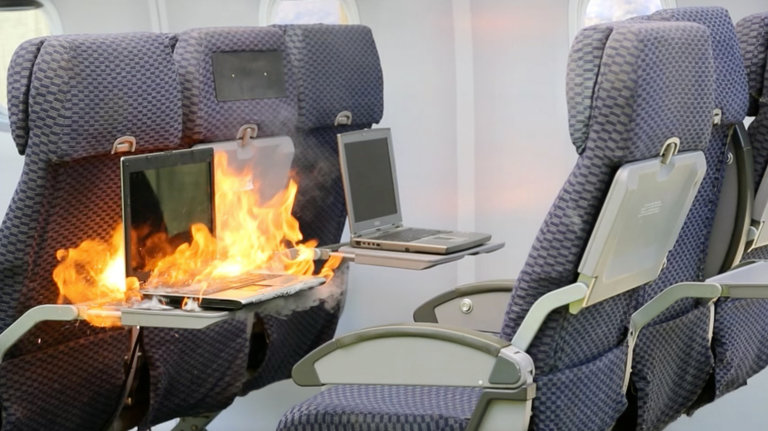 This is the kind of in-flight fire from lithium batteries tat the US govt. wants to avoid but how about in the luggage compartment?

That’s the other challenge with such a move and frankly speaking, it might be easier to tackle such explosions in the plane itself than when it is hidden away from the eyes of passengers some of whom may be trained agents.

Now Sony was the was the first company to commercialise such a concept in 1991 and since then we have seen the batteries used in phones and even the Mar Curiosity rover which is currently in Mars gathering information for NASA scientists. Lithium ion batteries charge faster than their counterparts and is able to adapt to modern phone designs because it can store enough energy even in a small package. Seeing that it’s the lightest metal, it can conduct electricity faster than most and is considered safe but then we have seen phones (with the latest example being the Samsung Galaxy S7) exploding and hoverboards that all use the technology catching fire when charging.

While the concept of using lithium batteries may be safe, human design flaws are often to blame primarily for their explosions. Even Samsung admitted that design flaws at the battery maker’s end was responsible for the untimely death of its Galaxy S7 whose production came to an abrupt end last year. But it’s not just always the fault of the battery makers because you see our desire for smaller and smarter gadgets can be to blame too. This puts pressure on lithium battery makers to also make smaller high capacity batteries and pressure from the hardware itself can cause damage to the electrodes which can eventually cause short circuiting and put simply, this means fire. Besides short circuiting, there is also little room for battery cooling which causes batteries to heat up thereby causing a chemical reaction that could make batteries eventually explode.

That said, such a situation becomes even more dangerous in a crowded and perhaps heated compartment in the plane where you may have many of these lithium battery based gadgets.

Maybe the authorities have a way out that we don’t know of but looking at this explosions below the passenger area of the plane could be a far worse threat than the other.