At an education event earlier today, Microsoft announced an edition of Windows 10 they call Windows 10 S.

First of all the S could simply be for “students” (not official by the way) but Microsoft doesn’t want to limit it hoping companies may also be interested in its new OS release.

It is a special Windows 10 for the education market on its own Surface devices or other third party devices. You can expect to start seeing devices running on Windows 10 S from June, 2017 and if you want it on a Microsoft device, you would need to fork out $999. That said, Windows 10 S will only allow you run apps from the Windows Store and by announcing this, it means Microsoft Office will finally come to the Windows Store.

Seeing as the education and research world values machine processing speed, Microsoft thought it should bring them just this by restricting what you can run on it and the main advantage of this is that, traditional Win32 apps run in the background for example and frequently run updates which in turn slows the overall speed of the machine and while in Windows 10, the Windows Store can help take care of this, Microsoft wants to totally eradicate that possibility with Windows 10 S. Taking that into account also means Windows 10 S will not only be safer eventually but faster and battery life efficient.

But you may be wondering if this would affect the Windows 10 experience but Terry Myerson who is the executive vice president for Microsoft’s Windows and Devices Group says it’s the entire Windows 10 with locked with Microsoft approve apps to make the experience better for the education environment. If you try to install a non-approved app, here’s what you’ll see; 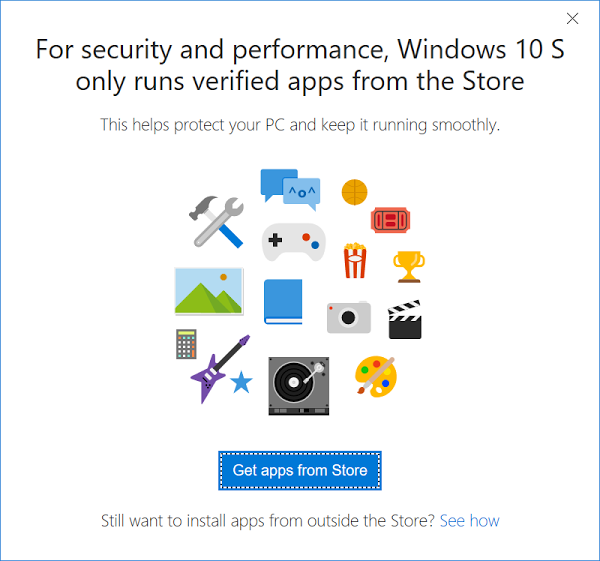 To take care of file storage, the operating system auto syncs with OneDrive and is cloud manageable. These are not feature you get by default in Windows 10.