iOS 10 will launch later this year probably in November as you may know. It promises some cool stuff that were before now probably unthinkable like the user’s ability to delete pre-installed apps like Maps, Calculator, Music, Videos and not just stocks. You can read about all the changes the latest in the iOS series will bring here. Meanwhile, there will be even more emojis for users. 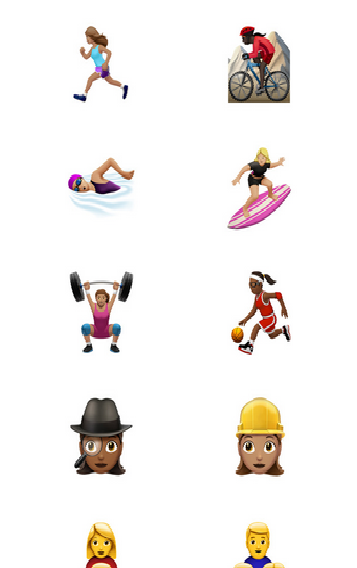 Apple announced this yesterday in a post it titled Apple adds more gender diverse emoji in iOS 10. In it the introduced a female swimmer, weight lifter and biker among other sports which women have also come to be identified with. Maybe this in the spirit of the Olympics which starts sometimes this week in Rio, Brazil. It’s not just about sports though, professionals services will also get female emojis as well so get ready to see some more diverse pilot and engineering emojis. Apple says it is working closely with the Unicode Consortium to ensure that popular emoji characters reflect the diversity of people everywhere.

There’s also the “modern family” representation like single mom and dad emojis as well including a rainbow which has some to be identified with LGBT. Apple won’t be the first as Facebook and Google have both proposed this at some stage with Facebook already implementing theirs in Messenger.

In February, a company known as Afro Emoji launched a series of afro centric emojis with the aim to close the diversity gap in emojis. In June also, someone created an emoji based Bible with the aim of encouraging the younger generation to read the Bible more. This just goes to tell you how much importance we have come to place on emojis in our daily online conversations.