It wasn’t long ago that we reported that iOS and Android controlled nearly 96% of the OS market in the fourth quarter of 2014. So now we have that out of the way but another look at just how profits are distributed among these top smartphone makers across the world. In a Wall Street Journal report, Apple recorded 92% of the total income from the World’s eight top smartphone makers and this represents a 27% jump from last year.

The report noted that Samsung and Apple accounted for about 100% of the total the total profits in the smartphone industry. How about others? You’ll recall that Microsoft recently wrote down about 80% of its smartphone value and announced that 7,800 jobs will be cut globally with its phone unit taking the biggest hit.

This figure if remarkable for Apple even as it sells less than 20% of the total smartphones in unit sales terms. 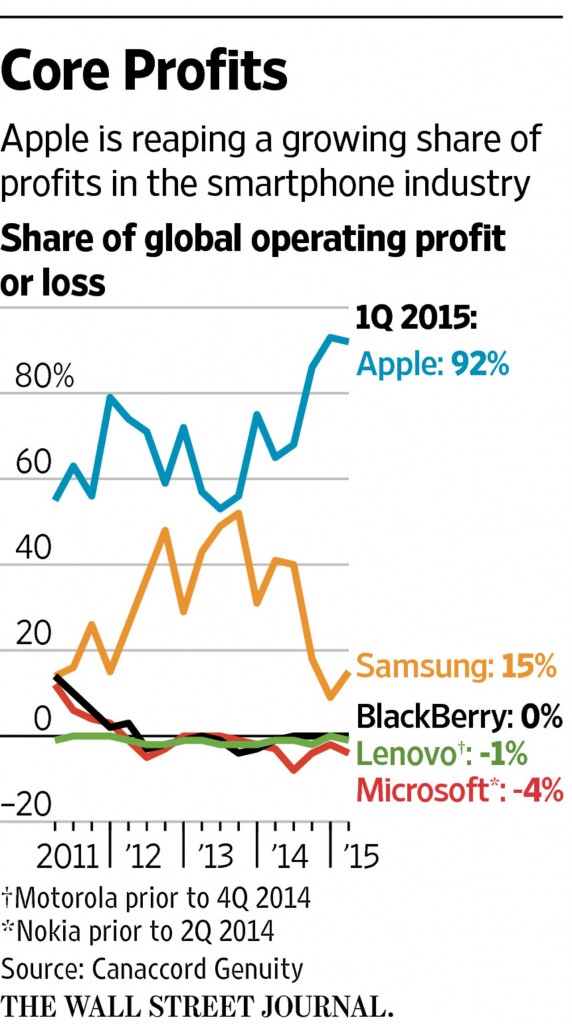 Apple has launched a series of services including its Music streaming recently to give users a more interesting experience of its devices.

Samsung surpassed Apple in sales terms especially in the first quarter of 2015 but this should all translate to real profit which is where Apple seems to be doing better than others. As for many other smartphone makers many of whom are based in China, they either made a loss when compared to their operating costs or didn’t make significant gains.

Many companies are springing up in this field with Xiaomi of China gaining grounds swiftly.