Apple’s iPhone continues to break records each year. In fact, Apple is said to have sold over 700 million iPhones Since June 2007 when it launched the first generation iPhone. This record reached an all time high in September when Apple reported it sold over 13 million units of the iPhones 6 and 6s in one weekend. The company has recorded huge profits as a result and according to a Wall Street Journal report, Apple’s share of the smartphone industry profit soared to 92%. The company recorded 92% of the total income from the World’s eight top smartphone makers and this represents a 27% jump from last year. How about Apple’s record cash stockpile? As at July this year, the company had over $200b in cash alone. Even CEO Tim Cook said they had an “amazing quarter”. In October, we did an analysis on how Apple has managed to maintain this edge at least over its main rivals. The simple method was cheap production cost but high sales price to loyal customers whom Apple has managed to keep using is devices. 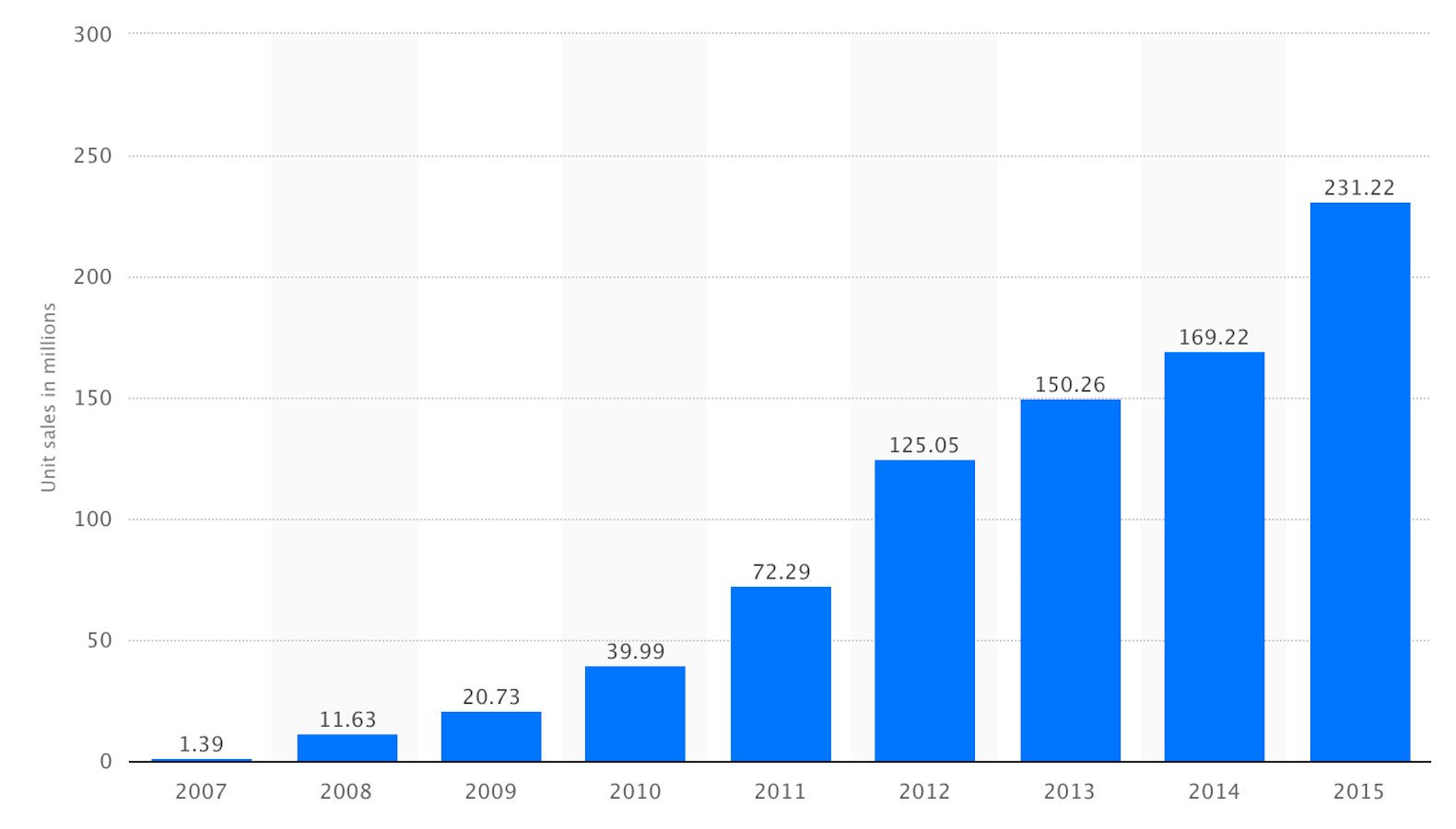 Well as with most reigns, it all depends on the loyalty of your subjects and how long you live. Numerous reports now have it that the year 2015 could be the year the iPhone peaked. These projection are from some of the biggest names you may have heard of like Morgan Stanley and Credit Suisse.

MORGAN STANLEY: On Monday, the financial services firm predicted that sales of the iPhone will drop by nearly 6% in Apple’s 2016 financial year (or 2.9% in the calendar year). Analyst Katy Huberty points to “higher prices in international markets (ex-China) and maturing smartphone penetration in developed markets [weighing] on upgrades and new user growth” as the reasons behind the drop. 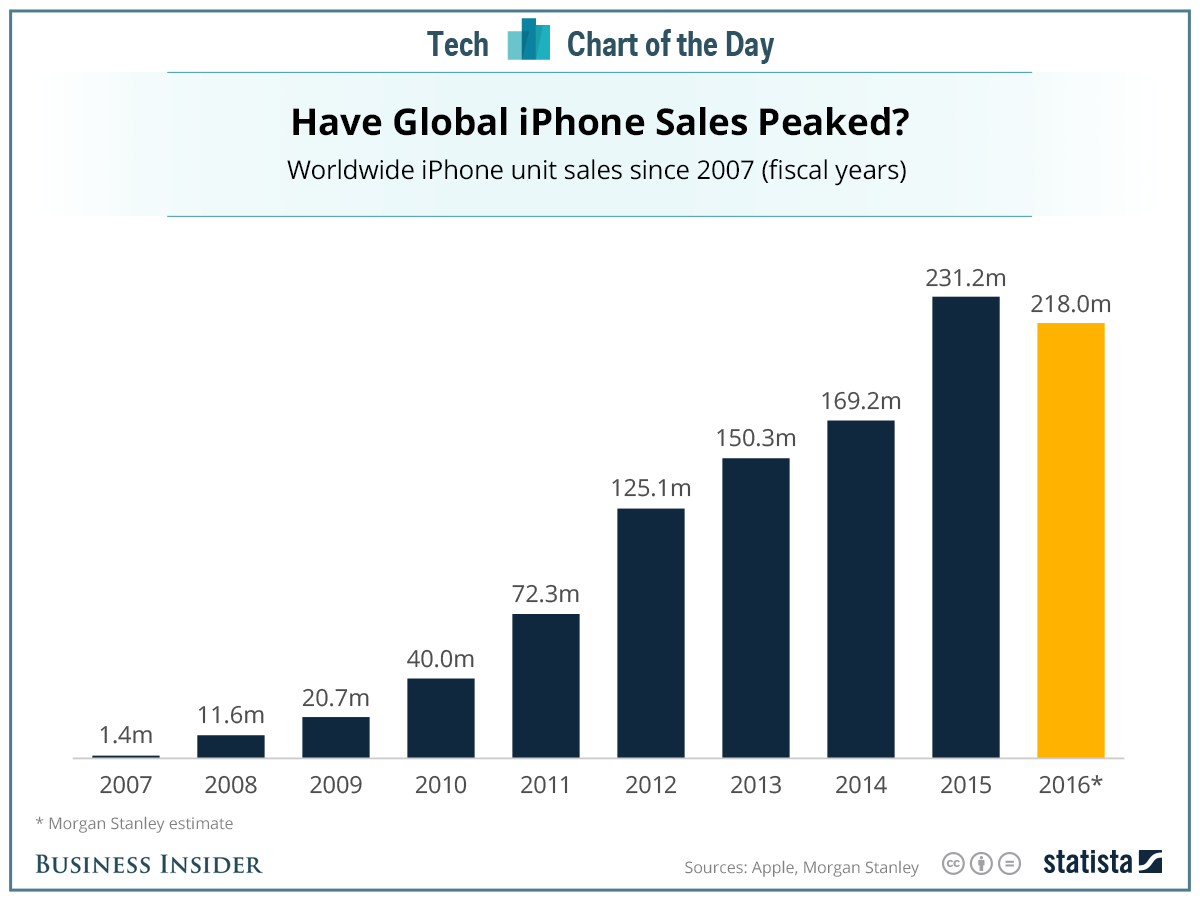 BAIRD: A Tuesday research note says “the Baird semiconductor team recently suggested a 20% cut in procurement orders based on its supply chain conversations.” Q2 of FY2016 will be down year-on-year, it expects, although it cautions that “we always take supply chain comments with a hefty grain of salt.”

CREDIT SUISSE: On Wednesday, it said it is lowering its estimate for calendar year 2016 iPhone sales to 214 million — 8 million less than its earlier prediction, and even less than Morgan Stanley’s 224 million CY2016 prediction. It says its Asian research team is detecting “a deeper cut in December and March production volumes. The cuts seem to be driven by weak demand for the new iPhone 6s, as overall builds are now estimated to be below 75-80mn units for the December quarter and between 45-50mn units for the March quarter.”

PIPERJAFFRAY: PiperJaffray’s Gene Munster is more effusive about the iPhone. He argues that while “investor concern about iPhone growth has increased based on measurable cuts to analyst estimates,” along with Dialog’s guidance revision, this isn’t the end of the world. “The next few quarters appear less significant to the broader iPhone story and the more important question is whether the iPhone will grow during the iPhone 7 cycle.” His answer: Yes. “We remain confident in our 4% cycle growth for iPhone 7.”

Morgan Stanley thinks iPhone sales in 2016 would be 218 million as opposed to the 231 million in 2015 which represents a 5.7% drop. The reports however did not highlight much on other Apple services like TV, Music and Watch among others. Apple’s iPhone prices have remained relatively high especially at a time when low cost smartphones have continued to hit markets like Africa and Asia.