People who have the tendency to instantly connect with people they don’t know on LinkedIn may have to exercise some extra caution on this practice. According to a report by CNBC, LinkedIn confirmed that there has been a “recent uptick of fraud on its platform.” Most times these are perpetuated by scammers who get involved with users and end up persuading them to make cryptocurrency investments. It’s been deemed as a “significant threat” by Sean Ragan, the FBI’s special agent in charge of the San Francisco and Sacramento field offices in California. “This type of fraudulent activity is significant, and there are many potential victims, and there are many past and current victims,” Ragan says.

Snapchat Is Testing A Paid Subscription Version Called Snapchat Plus

CNBC explains that the scheme typically begins with a fraudster opening a fake profile and then pretending to be a professional reaching out to fellow LinkedIn users. They quickly engage unsuspecting LinkedIn users in small talk and offer to help make more money through crypto investments. These fraudsters move into convincing their targets to go to an actual crypto investment platform, “after gaining their trust over several months, they tell them to move the investment to a site controlled by the fraudster.” Thereafter, the money is “drained from the account.” Victims interviewed by CNBC reveal that since LinkedIn has earned a reputation as a trusted platform for business networking, unsuspecting victims tend to believe the investments are legitimate.

“So the criminals, that’s how they make money, that’s what they focus their time and attention on,” says Ragan. “And they are always thinking about different ways to victimize people, victimize companies. And they spend their time doing their homework, defining their goals and their strategies, and their tools and tactics that they use.” Ragan further told CNBC that “the FBI has seen an increase in this particular investment fraud,” which is quite different from the known practice “in which the criminal pretends to show a romantic interest in the subject to persuade them to part with their money.” 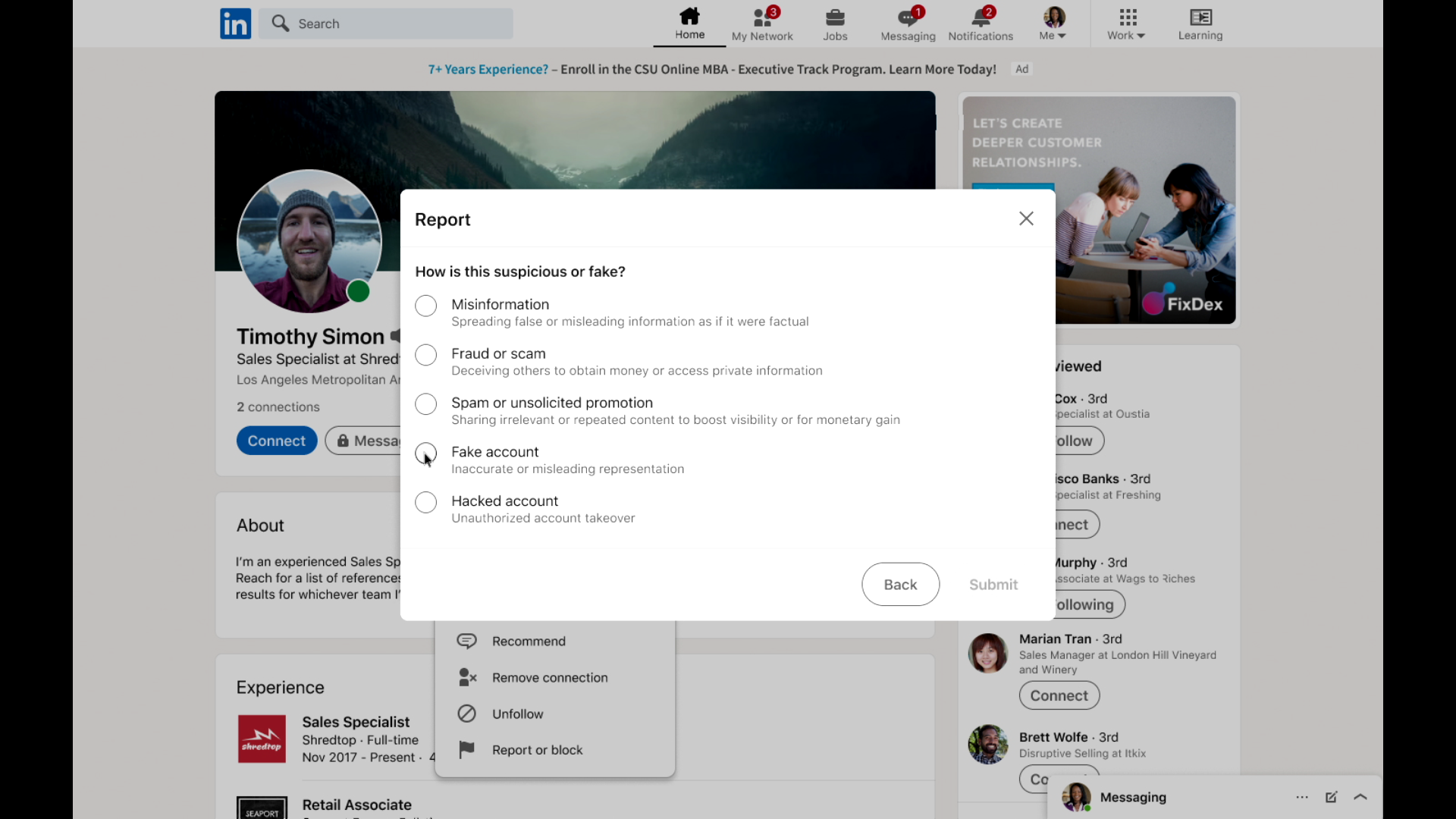 LinkedIn released a blog post, encouraging users to report suspicious profiles. The company’s director of trust, privacy and equity Oscar Rodriguez told CNBC that “trying to identify what is fake and what is not fake is incredibly difficult.” The company urged users to “only connect with people you know and trust” and “be wary of people asking you for money who you don’t know in person.” The company added “This can include people asking you to send them money, cryptocurrency, or gift cards to receive a loan, prize, or other winnings.

Another suspected practice these fraudsters capitalize on is by listing “job postings that sound too good to be true or that ask you to pay anything upfront” and “romantic messages or gestures, which are not appropriate on our platform” as signs of potential fraud attempts.

The company isn’t only relying on users to report suspicious accounts as its only defence against scammers on its platform. According to LinkedIn, “We work with peer companies and government agencies from across the world with the goal of keeping LinkedIn members safe from bad actors. If a member encounters or is the victim of a scam we ask that they report it to us and to local law enforcement.”

According to its semiannual report on fraud in 2021, the company has removed more than 32 million fake accounts from its platform. From July to December 2021, the company’s automated defences have stopped 96% of all fake accounts — that includes 11.9 million that were stopped at registration and 4.4 million that were proactively restricted, the report said. Members reported 127,000 fake profiles that were also quickly removed from the platform.

Although LinkedIn said it doesn’t provide estimates on how much money has been stolen from members through its platform, several victims interviewed by CNBC have reported losses ranging from $200,000 to $1.6 million. “We just never thought there could be such malicious intent behind a LinkedIn profile,” one victim who lost $350,000 said. Another victim who lost $200,000 said “The fraudsters hide behind successful companies. One of the biggest reasons I accepted the invite was the person stated on their profile that they worked for a legitimate company.” “We’ve lost a lot of money,” a victim who lost $700,000 said. “And it’s not just all of our savings, people have lost their houses and their car loans. It’s life-destroying and soul-crushing.”

Here’s How To Make A Viral Video