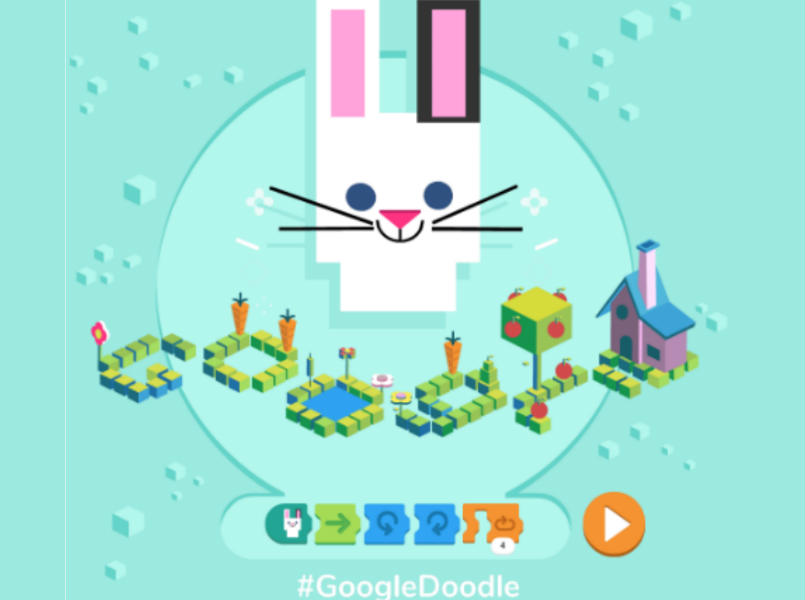 Google’s doodle is very interactive and gives people a taste of coding in a very unique and fun oriented way. It is a mini-game that allows you to program just the way a rabbit moves on the page.  A white rabbit hunting for carrots illustrates how programming using code can create an effect or action. The game is quite easy and gives you a little taste of programming while playing it. It is mostly based on the Scratch programming language for kids.

Doodle was created by three teams: the Google Doodle team, Google Blockly team, and some MIT Scratch researchers and the doodle relies on the children’s programming language blocks. Apple attempted to use SWIFT to make kids more comfortable with programming and Microsoft used the game Minecraft to encourage kids to program.

This week is actually Computer Science Education week and Google celebrates the 50 years of the existence of kids programming languages.

There’s a tradition of commemorating important dates and people over there at Google, therefore the doodle team over at Google is also celebrating 50years since the children programming languages were introduced.

The creation of the first ever coding doodle which is the coding for carrots was introduced to mark this occasion.

The first coding language for kids called Logo, was developed by Seymour Papert and MIT researchers in the 1960s even before the introduction of personal computers (PCs).   A statement by Champiko Fernando, one of the project collaborators states “Like Logo, Scratch was developed at MIT and builds on Paper’s early ideas about kids and computers. It’s designed to be less intimidating than typical programming languages, but just as powerful and expressive”.

Google is also offering the ability to create your own Google logo this week using Scratch. And some coding works done by kids can be seen on Google’s Education page.

Unlike in developing countries, the developed nations have included programming in their national education curriculum, making it imperative for kids to grow up with basic programming knowledge.

And in an article on www.google.com/doodle, on celebrating the Computer Science Education Week, Google says “we celebrate 50 years since kids programming languages were first introduced to the world with a very special creation (and furry friend): our first ever kids focused coding Google Doodle! Today’s Doodle was developed through the close teamwork of not one or two but three teams”.