For those wondering how the second day of Mark Zuckerberg went, well here’s what he did in Lagos today. He had a run in the morning around the Ikoyi area in Lagos and for those who have been following the Facebook CEO, you may know that one of his 2016 resolutions is to run for a mile at least every morning.

He then proceeded to the Landmark Centre in Victoria Island to hold a developers workshop where he also got a chance to answer questions from food in Nigeria and the future of Facebook and its acquired companies.

Mark Zuckerberg holds these Q&A sessions whenever he gets a chance to visit other countries even though this is part of his weekly activates at the Facebook headquarters in Menlo Park where he gets to hear from staff directly. 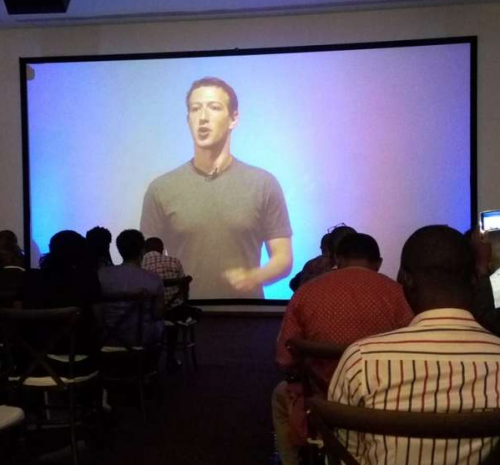 As for why he came to Lagos, he said he “decided to come to Lagos first because of the vibrant developer and entrepreneurial ecosystem you guys have here”

Perhaps one key thing the CEO revealed was plans to provide Facebook services in more Nigerian languages. They won’t be the first to do this as Google offers its services in major Nigerian languages but seeing as Facebook is competing with Google in the advert space which they now dominate with 31 percent for Google and 12 percent for Facebook, it’s necessary to make Facebook services more attractive to Nigerian users.

Nigeria is the biggest market in Africa by population and is projected to be one of the most populated countries in the world by 2015 with a population of 430 million. With just under 6 million users on Facebook in 2014, Nigeria now has over 16 million users on Facebook with the number expected to grow well into 2020 and this represents a huge opportunity for Facebook with respect to ads.

As for the rest of his stay in Nigeria, we don’t know as of now but there are reports that he will be in the nation’s capital Abuja at the Banquet hall in Aso Villa where he’ll meet with government officials including the President and his vice. We’re told that there will be a startups event there as well. Again we’re not sure as this may end up being canceled seeing as his hosts have kept his itinerary close to their chest.

Oh by the way he crashed a Nollywood (Nigeria’s movie industry) event as well where he met with the likes of RMD and Basket Mouth.

How To Avoid Branding Nightmares In The Digital Space

eCommerce Development Trends That You Should Know About In 2021

AWS re:Invent: Voice Recognition For Call Centres And Voice Print Among Others