Nvidia researchers have used a fantastically straightforward approach to quadruple the effective resolution and double the refresh rate of cheap, off-the-shelf LCD panels: Stacking them on top of each other. This technique, which Nvidia calls cascaded displays, could be key to developing cheap, ultra-high-resolution screens that are needed for consumer-oriented head-mounted displays like the Oculus Rift. Nvidia has already built a prototype cascaded display device — using a 3D printer no less — that closely resembles the Oculus Rift, and the results are surprisingly good.

At first, the idea of stacking LCD panels sounds utterly crazy — I mean, aren’t LCD panels opaque? In actual fact, while the gaps between the pixels are opaque (that’s where all the control circuitry goes), the pixels themselves are fairly transparent — otherwise illumination from the backlight wouldn’t be be able to shine through. Realizing this, Nvidia decided to test whether you could increase spatial resolution (i.e. pixel density) by quite literally stacking LCD panels on top of each other — and sure enough, with a bit of software wizardry to account for the rather odd setup, you can.

Nvidia started by buying two fairly standard 7-inch 1280×800 LCD monitors, yours for just a few dollars from the nearest Chinese supply chain. The LCD panels are removed from their casings, and the backlight is removed from one panel (which will eventually be the front panel in the stack). Due to a conflict in polarization (the rear polarizer on the front panel is crossed with the front polarizer on the rear panel), a quarter-wave film is placed between the two panels. The two panels aren’t placed exactly in front of each other, but rather with a slight (quarter-pixel) offset.

Nvidia’s cascaded display: Diagram showing how each front pixel controls four rear subpixels
Diagram showing how each front pixel controls four rear subpixels in Nvidia’s cascaded display
This offset is important as it means that each pixel on the front display actually acts as a “shutter” for a cluster of four pixels on the rear panel. This is why the screen offers quadruple the spatial resolution (multiplicative), rather than just double (additive). It takes some special software to drive this new cascaded display, of course, but Nvidia is obviously well suited to such a task. As you can see in the images throughout this story, this setup really does add a significant amount of resolution. Both the front and rear panels can be used in unison to provide refresh rates above 60Hz, too.

The primary application that Nvidia appears to be targeting with this new approach is head-mounted displays (HMD), such as the Oculus Rift. The Rift, by virtue of it being a cheap device, uses a fairly low-resolution screen — and when the pixels are that close to your eyes, low resolution can be really unpleasant (it’s a lot like the low-resolution arcade machines, if you remember those). Rather than quadrupling the spatial resolution by putting an ultra-expensive 3840×2160 (4K) display in there, why not just stack a couple of cheap LCDs? By cramming more effective resolution into a HMD, you also have the opportunity to spread the pixels out a bit, to provide a wider field of view (human vision is closer to 180 degrees, rather than the 100 degrees offered by the Rift and similar HMDs). 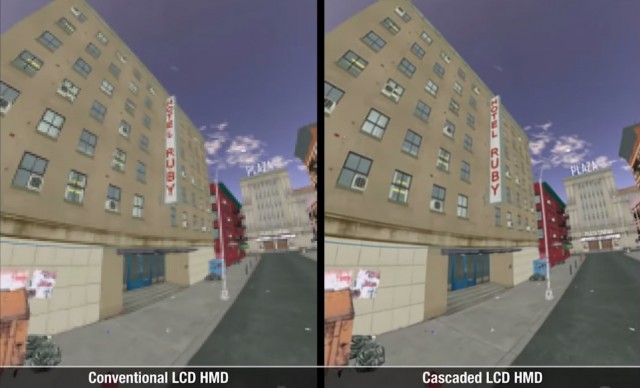 A normal LCD display (left) vs. Nvidia’s cascaded display. Note the massively increased legibility on the hotel signs.
There are some caveats to Nvidia’s approach, of course. Stacking one display in front of another does decrease the overall brightness of the image — but this is more of an issue for laptop or smartphone, rather than a HMD where the image is very close to your eyes. There is also a fair bit of distortion (mostly corrected in software) and limited viewing angles (not correctable) caused by separation of the two panels — again, though, the impact of these issues is much reduced in a HMD. [Read: Virtually perfect: The past, present, and future of VR.]

For a lot more details on how Nvidia created a cascaded display (and a less successful attempt at doing the same thing with two LCoS pico projectors), read the research paper. The video (above) is also well worth watching.