Twitter didn’t have a good 2016 with respect to financial results and user growth and when there was news all over the place that Twitter was going to be acquired, many investors saw it as necessary seeing as the company needed investment and probably leadership to turn things around. Alas that didn’t happen as one prospective bidder after the other pulled out of the race but that left Twitter with the only choice of managing itself and one of the ways they did this was to fire about 300 employees last October.

To underscore just how badly Twitter is doing financially, a report says Twitter’s digital ad revenue is projected to fall 4.7 percent this year while Snapchat may boost its ad revenue by 158% to $770 million in the U.S. this year and reach $2.2 billion in 2019. This comes as digital ads space leaders Google and Facebook are expected to continue their dominance well beyond this year.

But could the bad financial year soon become a thing of the past for Twitter?

Well we are hearing that Twitter is thinking launching a subscription based service that would allow certain users pay $19.99 a month for some nice and exclusive features. According the user who got the survey message asking users how they would feel about such a service, there will be new features

Scoop: Twitter is developing an 'advanced TweetDeck' that would be available for monthly subscription fee & feature a range of new features: pic.twitter.com/MlKw8xZlVS

This premium tool set will provide valuable viewing, posting, and signaling tools like alerts, trends and activity analysis, advanced analytics, and composing and posting tools all in one customizable dashboard. It will be designed to make it easier than ever to keep up with multiple interests, grow your audience, and see even more great content and information in real-time.

It would also offer extra features such as advanced audience insights & analytics, tools to monitor multiple timelines from multiple accounts and from multiple devices, including mobile, all in an ad-free experience.

Here’s a list of the features of the potential service; 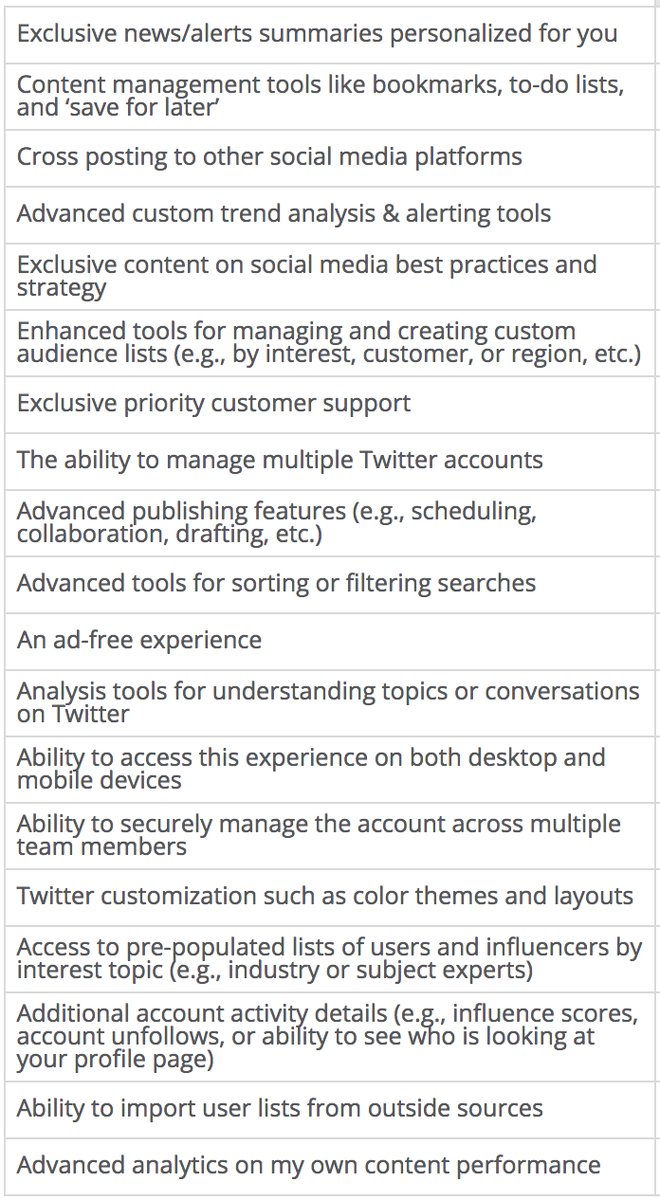 Twitter has been undergoing a series of changes lately to address abuse claims among others. When Twitter CEO Jack Dorsey asked users last year for changes and features they would like to see on the site going into the New Year, people suggested a tweet edit and bookmark features.

Maybe Twitter convert a percentage of its over 300 million users into paying ones to shore up its revenue.