It’s been barely two months since I reported the not so bright outlook for global PC shipments which in itself is an indication of how people and organisations are buying new computers. Gartner and IDC are two leading organisations that measure this by taking by taking note of inventories and eventually use this data to come up with global market shares of PC manufacturers. But now depending on which of the sides you fall into, there’s some good and bad news now that second  quarter results are out.

Second quarter results show a “health” growth in the US and that’s first past of the good news but the same cannot be said of other regions especially the EMEA (Europe, Middle East and Africa) as users continued to show great interests in mobile devices instead. According to Gartner, “mobility needs continued to push interest towards notebooks, which supported overall volumes. This is the first recent quarter of comparison that was not impacted by Bing promotions (that inflated shipments through Q1 2015). As a result, 2Q16 shipments represent a more normalized growth trend – still confirming long-term market erosion for traditional PCs, but showing hints of short-term stabilization. Currency fluctuations in the EMEA region, localized political developments in Western Europe, and ongoing instabilities in the Middle East are also constraining shipment growth.”

This doesn’t surprise much especially when it comes to the African market where mobility is now the order of the day for both startups and individuals. According to Moore’s law, the computing world doubles the amount of transistors in a dense integrated circuit every two years which makes it safe at least for now that the average life cycle of a laptop computer should be two years. But let’s add one more year to that law to cater for economic factors which play a great role in the way people buy computers. So we now have that it’s expected that the average computer user should use a PC for a maximum of three years in order to stay up to date with trends in the industry. But it’s not uncommon to see people use PCs for well over five years in Nigeria and by extension Africa. This is primarily due to a great influx of refurbished and fairly used PCs into the market which offer basic services to users and are usually more affordable. A big majority prefer to buy this over brand new products. Perhaps the most obvious reason is the economic power. Gartner for example identified currency fluctuations in emerging economies as well the effects of Brexit. Nigeria’s currency has weakened against all major currencies of the world and has performed the worst against the US dollar and the reason might be rather obvious. Oil is the mainstay of the economy and since a crash in the price of crude in the international market, the major source of FOREX has since been hit and this has further weakened the purchasing power of the Naira. For example, in just two years, the Naira has gone from 250 Naira against the dollar to about 350 naira now in the parallel market and with wages and incomes still the same, it’s now more difficult for people to buy PCs which are primarily priced in the US dollar.

In all though like I wrote in may, it is expected that as automation of business processes continue to gain attention worldwide, companies are going to wither maintain or increase IT budgets going forward which means that more PCs will be bought even as people migrate to Microsoft’s Windows 10. After the 29th of this month, it will now cost the average user $119/40,000 Naira to upgrade to Windows 10. This might influence companies and individuals to just buy a new PC altogether.

In conclusion, we may see this trend change eventually in future results.

But just before I hang up my pen, if you look at the two charts below from Gartner and IDC, Lenovo still leads in worldwide PC shipments but keeps losing grounds when you  look at the year on year figures. 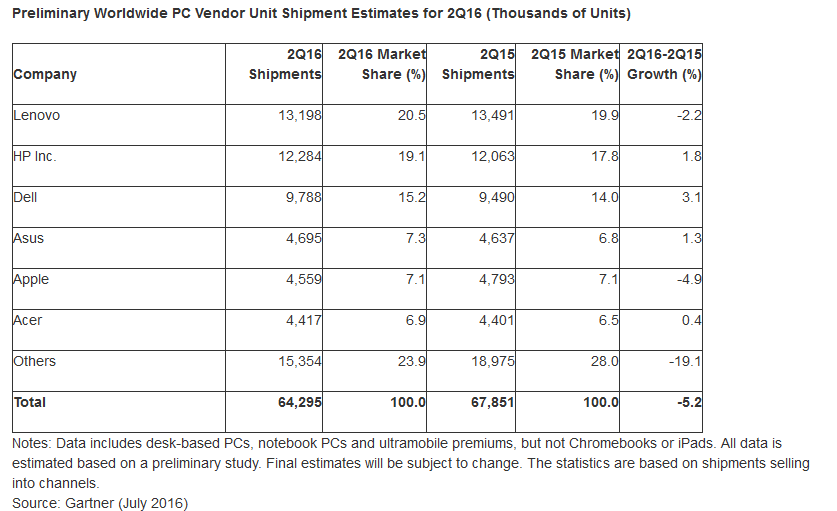 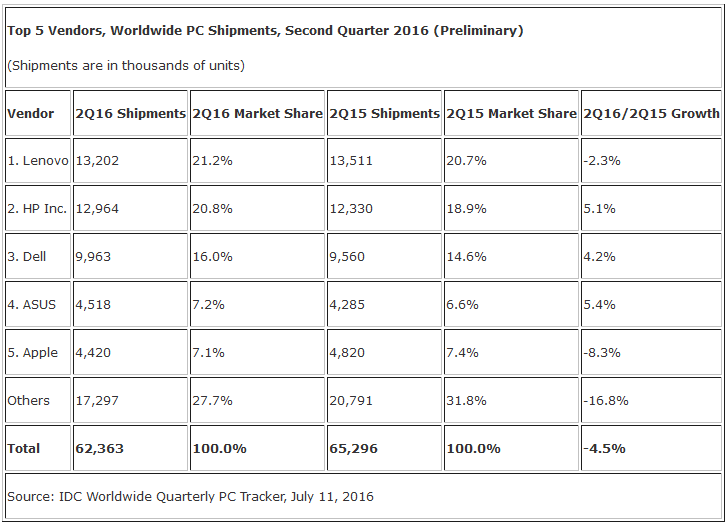 HP is fast catching up to Lenovo in global market share as Lenovo now has a 0.4 percent lead over HP in the second quarter of 2016  compared to a 1.8 percent lead in 2015. In the United States, Dell leads with a markers share of 27 percent and is closely followed by HP with a market share of 26.3 percent while Lenovo comes third with a 14.5 percent share according to the Gartner chart. IDC disagrees though saying HP is number one in the US with Dell and Lenovo coming third respectively. 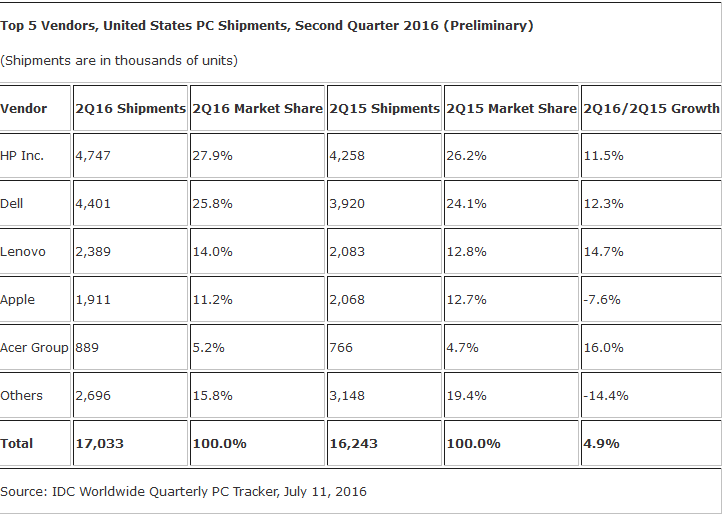