Microsoft has announced a free app from Microsoft Research that runs  on iOS with the aim to replace your iPhone and iPad camera app. Called Microsoft Pix, it is a smart camera app built around Artificial Intelligence (AI). “It’s built with serious intelligence behind the lens, so it’s a bit like having a professional photographer tweaking your settings between each shot.” 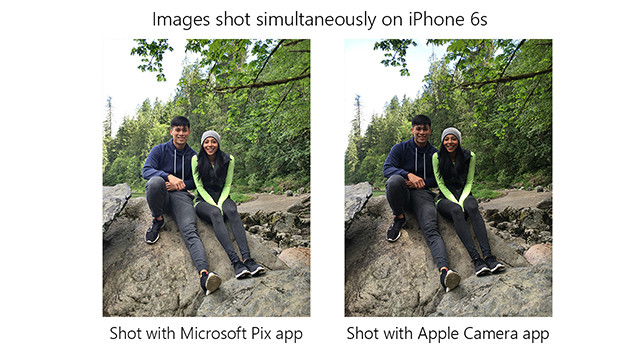 So you know how you want to take that once in a lifetime shot when hanging out with folks but have to ensure you take the right picture for memory sake? Well you would have to do this by taking multiple shots until you get that right picture but with Microsoft Pix this could be a thing of the past. Once opened, Microsoft Pix continuously takes up to 10 pictures and uses an intelligent algorithm to choose the best shots for you. Put in Microsoft’s own words, this ensures that people and scenes look their best, so you can focus on enjoying the moment instead of struggling to capture it. It doesn’t just save the best pictures for you as the app is able to auto enhance the way the final pictures appear. It’s capable of correcting colours and remove background noise.

As for videos, Pix uses Microsoft’s Hyperlapse technology to stabilise videos. Videos shot with Microsoft Pix are automatically stabilized for smoother playback, and can be time-lapsed and saved at many different speeds the Hyperlapse technology which is available on Android and Windows. With Hyperlapse in Pix, you can now tell a fast story from multiple videos taken using the app and share them with loved ones.

With this, Microsoft is continuing its push into other platforms. Microsoft has introduced Office on iOS and has announced running its exclusive SQL database on the open source Linux.

Here’s a link to the app.