As you may have heard, there’s a new version of the iOS (Apple’s mobile operating system) coming soon as Apple announced at its 28th WWDC (Worldwide Developers Conference). The software is now available in developer beta but the public beta is expected at the end of the month. But here’s what to expect when you finally have the chance to upgrade to the latest OS.

Siri is now able to speak and translate more languages (French, Chinese, German and Spanish with more to follow) for you which means you can now get translations on the go. With improved learning, Siri is now able to predict and recommend things to you based on your interests. So a demonstration of this would be what Apple’s Craig Federighi did when making the presentation where he visited a travel site in Iceland and before you know it, there were stories about the nation of Iceland thereby providing you with more information in the News app about your potential destination.

Apple Pay now support peer-to-peer money transfers like PayPal and other payment gateways. This means that you can now use Apple Pay to transfer money between you and loved ones and the fact that Apple integrated the feature with iMessage makes it even more interesting. So it works as an iMessage app that you can call on during conversions. This comes as Apple is making it easier to access apps in iMessage. All your messages are now stored in iCloud which also means all your messages are now synchronised across multiple devices.

The control centre is going to be bigger in iOS 11 which means there’s room for more functions on that single window. No need for swiping right and left as it is now to access functions. Even the 3D Touch features that gives you access to more options comes to the Control Centre from where you can hold down a function to see more options. So if you hold it down with respect to music for example, you get to see the music control buttons just from a single touch.

With respect to notifications, pulling down the status bar will now show you the same interface as the lock screen. By swiping up in that window in iOS 11, you will be presented with only recent notifications.

Do Not Disturb feature on the iPhone

With this feature, you can turn it on while driving and even though notifications come in, they will come in with the screen still turned off. In the feature, there’s the auto reply feature that lets people who are trying to contact you know that you’re behind the wheels and won’t be able to answer them until later. Of course this has to do more with safety.

But if say you forget to turn in this feature, the iPhone can monitor your Bluetooth connectivity status to determine whether you’re moving or not and ask you if you would like to turn on the feature.

You can use Maps in iOS 11 to access floor plans of public places like airports and shopping centres. This is to make it easier for a user to access a large public space without hassles. But it looks like the feature will launch with select areas for now but Apple says it expects more locations to be added with time.

Apple is adding more effects to Photos. You can now make Live Photos bounce by playing them forward and backwards. iPhone 7 Plus users can now add spatially aware objects to images using DepthKit (Apple’s depth-sensing cameras). File compression in iOS 11 promises an improvement double what it is now while preserving the file which means you can now take more pictures and videos using this technology without worrying much about storage space. This is as result of H.265 or High Efficiency Video Coding and High Efficiency Image Coding technologies.

This is similar to what is obtainable on Android devices where you see “File Manager”. The new app on iOS 11 helps you manage files by showing you stored documents on local and third party storage. This is designed to better help you access files especially if you have plenty of those on your devices. 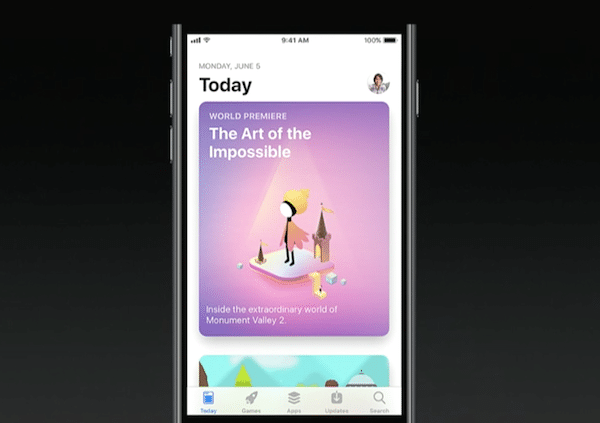 The App Store gets the biggest makeover since its launch in 2008. It gets a Today tab which is also its Home Page where you will see new additions to the store. The new Games section also let users now easily access games and then there’s a shortened app review time.

Apple’s augmented reality (AR) push receives a boost in iOS 11 in that its ARKit will now standardise AR functions across all apps that use them. Using its improved ambient light awareness and motion tracking, you should get a better experience regardless of what app you’re using whether it’s Pokemon Go or any other AR based app. With improved animations, your surroundings will now better integrate AR objects into your natural environment.

Airplay 2 will allow multi-room audio for Homepod (its newly announced Amazon Echo and Google Home competition) users. This can be controlled using the Home app, Siri or even the newly designed Control Centre. This function is also integrated with Apple TV. The multi-room audio feature allows users to select different Airplay-supported speakers and other third party applications.