BitTorrent, the company best known for making peer-to-peer software that allows users to download the same file from multiple sources simultaneously, is turning its distributed approach to chat and voice-messaging services, launching a pre-alpha version of the chat service BitTorrent Bleep last week.

Most chat applications take a fairly simple approach to communication. One user enters an input—a short text or voice message—which is sent through a central server that relays the message to its recipient, who can respond in kind. That server can hold onto all sorts of information about the conversation, including the conversations themselves as well as metadata that can reveal who was in contact during a chat and when it took place.

“These central repositories of metadata are the target of choice for snooping government agencies and hackers alike,” said Bleep product head Farid Fadaie in a blog post. In recent years, documents released by leaker Edward Snowden have shown that services like Skype turned both metadata and full video conversations over to the U.S. National Security Agency.

Bleep was in development prior to revelations about government snooping, but BitTorrent CEO Eric Klinker says that the company expects the renewed focus on Internet privacy that accompanied the news to drive interest in the service. “Any service you look at on the Internet is frighteningly centralized now,” says Klinker. “The mission of BitTorrent is to turn away from that trend, and imagine anything on the Internet as a distributed version of itself. It’s great that the market is starting to turn towards where we’ve always been.” 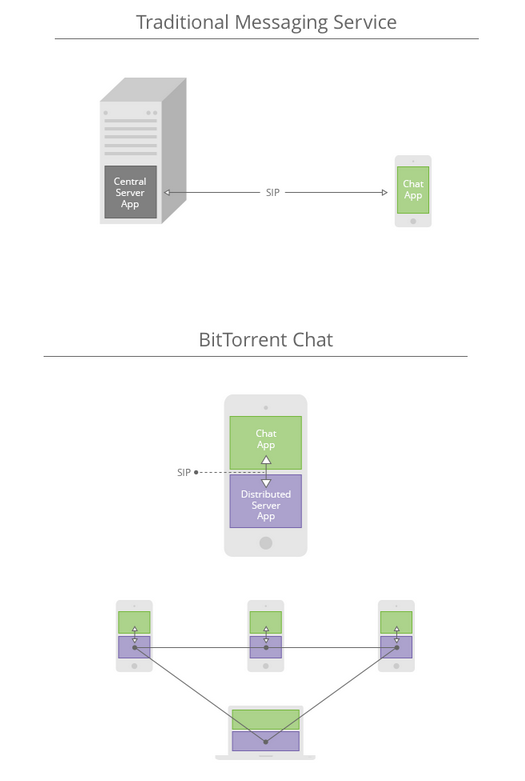 Rather than a traditional chat login like a username, Bleep users are assigned a pair of mathematically derived keys—one public, that serves as the user’s public face on the service, and one private, that allows for encryption of messages sent over Bleep. To chat over Bleep, users exchange public keys.

The way messages pass between users will be different as well. Instead of routing messages through a server, BitTorrent Bleep uses the same distributed hash table technology (DHT) that makes it useful for identifying and sharing files. That eliminates the need for a central server, meaning there’s no record stored on who you chatted with, for how long, or about what. To start a conversation, Bleep pings other computers on the peer-to-peer network that operates the service, which finds the intended recipient by looking for other users who are in contact with them.

That may sound less secure than a traditional server—after all, it’s a lot of exposure of who you are and who you’re looking for—but BitTorrent engineers have added encryption protocols to their DHT to keep the requests secure and private. In addition to encryption protocols, Klinker notes that software engineers had to work to speed up the DHT tool to ensure it could make real time voice and text chats flow smoothly in real time.

Right now, Bleep is available only to invited testers, and it only works on machines running Windows 7 or 8. Following this test, though, Klinker says, the feedback from the first generation of users will be factored into the design of further iterations of the technology. Versions for Mac and—perhaps more pressingly for a chat application—a variety of mobile platforms, are in development, though Klinker says that it’s too early to announce a timeframe for Bleep’s arrival on those devices.