To the list of companies that are competing with the up-and-coming cloud storage and collaboration services like Dropbox and Box in the enterprise, you can now add Amazon.

The Web retail giant, which also happens to be the biggest provider of on-demand computing capacity in the world through its Amazon Web Services unit, today announced a service called Zocalo, and its feature set should sound familiar. Amazon describes it as a “fully managed, secure enterprise storage and sharing service with strong administrative controls and feedback capabilities that improve user productivity,” through which users can store and share documents and photos from any device.

Zocalo was one of several new services that AWS announced today at an event in New York, but it’s the one that’s getting the most attention. By my count it’s the second enterprise-focused service from AWS that regular day-to-day employees who don’t work in the IT department might use, the first being WorkSpaces, its virtual desktop service, essentially a desktop PC that lives in the cloud.

In fact Zocalo makes for a natural extension of WorkSpaces Amazon CTO Werner Vogels said in an interview with Re/code today. Its primary purpose to upload documents, share them with colleagues, mark them up with comments and make revisions as needed. These are all basic features that Microsoft’s Office 365 and Google Drive have, as do other cloud-centric office suites like Zoho.

One important feature of Zocalo is its ability to integrate with existing corporate directory services. That means that there are no new sign-in credentials to create. “Our customers were telling us that the systems for doing that are complex,” Vogels said, adding that most people end up collaborating over email. Extended chains of email message make it complicated to keep track of revisions to a document. “This happens because the other tools that are available are not up to par,” he said.

So why compete with Box and Dropbox and all the others? Vogels doesn’t see it that way: “This is not a winner-take all market.There’s room for a number of products out there that will have unique capabilities.”

While most AWS services tend to replace back-end services like Web servers and storage gear and things that most workers wouldn’t normally use, WorkSpaces and Zocalo (see a screenshot below) are arguably services that every employee in a company could use every day. Does it mean a new direction for AWS?

Vogels demurred at that: “We’re in the business of managing the pain points for the enterprise,” he said.

Both Box and Dropbox have their own strengths to defend against Amazon. Dropbox which started out as a consumer-facing file-sharing service, has been building up its own enterprise-focused business in recent months. Its biggest strength is its 275- 300-million-strong user base, through which it has built a strong presence in a lot of businesses.

Box was born as an enterprise-facing business, and according to its latest filings finished its most recent quarter with 39,000 paying corporate customers and 27 million individual users. That gives it a pretty strong presence in businesses of the sort that Amazon will go after. 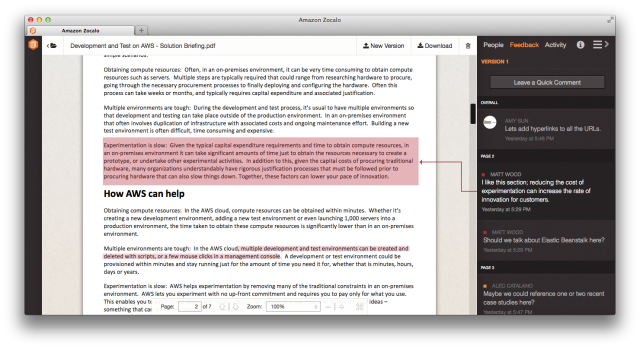 Dropbox declined to comment on Zocalo. One complication: Dropbox is an Amazon Web Services customer and uses its S3 file storage service as a significant part of it own product. It’s not the first time that Amazon has competed with a customer. Netflix is a big a customer and relies on AWS to handle its video streaming service, the one that Amazon Prime competes with.

I also checked in with Box, which just Monday updated its IPO filing with the SEC, and now may have to list Amazon as a potential competitor. I got this from CEO Aaron Levie: “It’s an incredibly exciting time for the cloud content category, and Amazon’s entry underscores the scale of the market opportunity.” Box calls Zocalo a “useful service for file storage and sharing.” Box itself is “laser focused on security, scalability and cross-platform support” that companies want and need to be more productive. Incidentally, Amazon says Zocalo checks those boxes, too. One way or another, the enterprise file-sharing dance floor is starting to look a little crowded.