Do I have to sell my house to develop a super-useful flashlight app? Probably… Depends on whom you will contract and what do you also want that app to do, except switching on LED flash on the phone. That’s this article will help you. Here you’ll find brief answer to all your questions according app development cost.

Let’s get it straight. Question “How much does mobile app development cost” is a big one. And answer to it isn’t as straightforward as it may seem. Although, every stage of app development requires its own article to be honest, we’ll try to cram all the necessary info into this article in a most convenient form possible. So you could get an idea of possible expenditures and pitfalls.

And now, without further ado, let’s get to it.

Whom to trust the project

The answer here might seem obvious. If you have a small project with a tight budget you hire few freelancers. You’re backed by proper funding and even bigger ambitions – go on and contract some agency. But, let’s have a look at some charts. 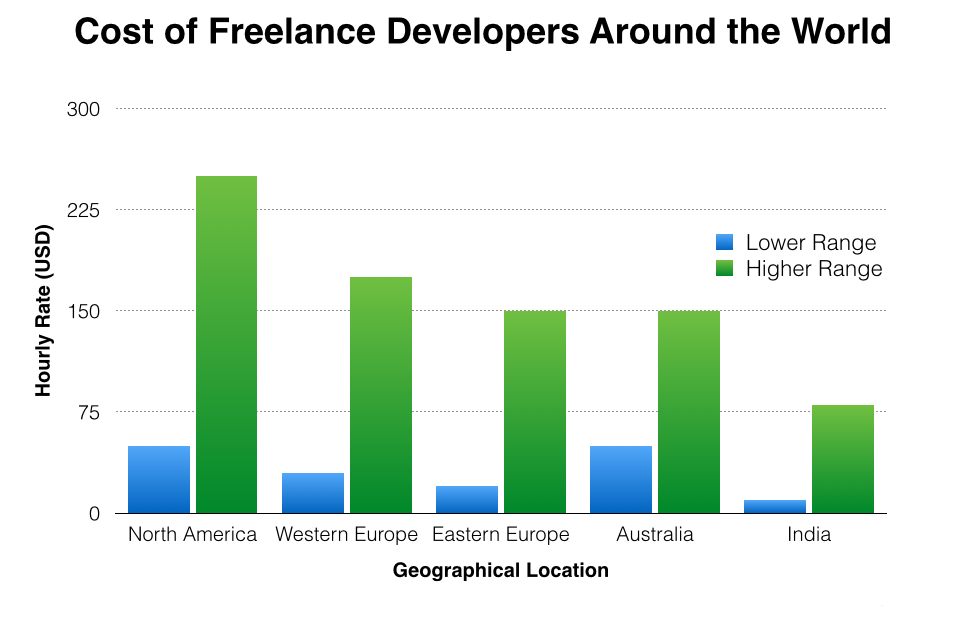 This chart shows average freelancer reward in various regions around the globe. 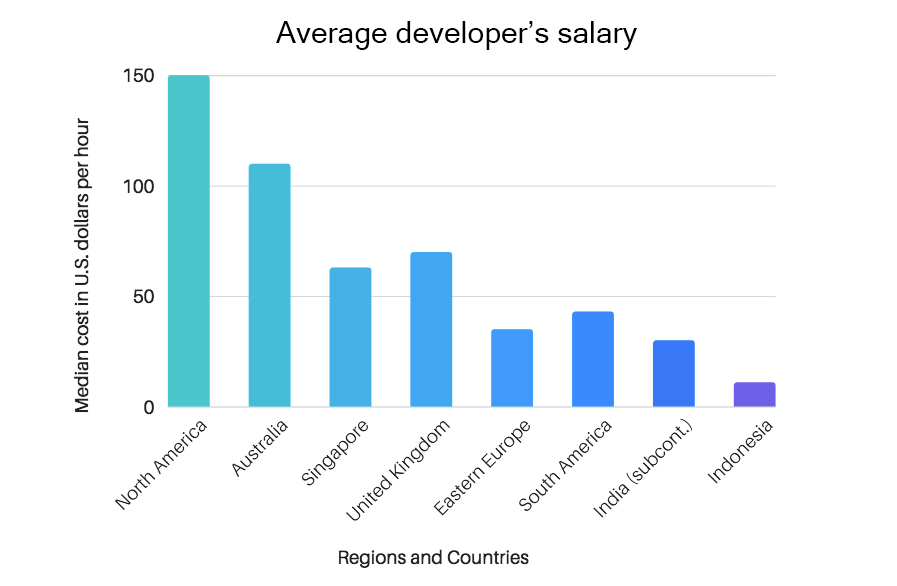 This one shows the same, but for staff developers in companies.

The part which interests us the most, is the dispersion of payrolls around the world. Only lower range freelancer’s payroll is pretty much similar everywhere. The rest differs drastically from region to region. Especially with staff dev’s salary. Which means, that for the payment of one developer in the US you can hire 3 or even 4 developers from Eastern Europe or India. Moreover, those are staff developers.

It is far better to work with an agency, as you’ll receive whole spectrum of services in one package. Where alongside with a developer you’ll be provided with services of a PM, designer and QA engineer. And all those people will work together in one team. While with freelancers, in most cases, hiring and controlling all that crowd is completely up to you.

To conclude, we’d recommend going with services of freelancers or dev companies from regions with lower payroll rate. If you’re on a tight budget, of course. On the contrary, if you’re not limited in finances, it is much better to play safe and hire a dev-team from well-established agency or professional freelancer. Thus you can be sure about project quality and timeframes in this case.

Here is the formula for estimation of literally any project: development time x $/hour rate = price. Yes, it’s the common formula for a whole industry. Therefore we’ll use it here, as well.

Any decent app development project should have these at its very beginning:

Hence, that all is more than doable on your own, it is much better to ask professionals for a help. In order to avoid minor flaws, which afterwards may and will turn in big troubles during sprint.

This is facade of your app. No matter how cool its features are and how practical it is, you nearly have no chances winning your customers attention on this oversaturated market. Therefore, more than responsible approach is required towards this question. And what can be more responsible as hiring a professionals?

All of that combined gives you nearly finished app. Actually, its shell.

The biggest and the most time-consuming part. It all depends on the number of features you want and complexity of those. Here is the list of the most common features among modern apps:

Sure thing, this list isn’t complete at all and not all features from it are necessary. You decide on your own what you need and what not. However, loginization, payments, social networks integration and location data collecting are like a gentlemen’s pack for a successful app nowadays. If you’re not building another “helloworld” app.

Control, that’s what it is all about. Not only you have to conveniently control what’s going on in your app, but also keep up with what your users are doing in it and what do they might require. These will help you with it.

Done right, analytics data will give you the key towards increasing the number of users drastically. While CMS is your path towards even bigger user engagement.

But if you have contracted an agency it might cost you nothing at all.

After doing an unimaginable amount of calculations, we’ve found out that an average app might cost you near $25.000. But, those calculations are more than rough. And there are lots of other issues to consider.

Luckily there are app cost calculators, which will help you with more precise calculations.

Alex Volski: I’m Copywriter/analyst at Thinkmobiles IT company. 5 years of experience in web and app researches. I have even done my own flashlight app once =). But I won’t stop, and I’ll become mobile app developer one day. So, it would be a pleasure for me to speak with you about it. Contact me if you have something interesting to say or ask =)