Twenty years ago, AOL was announced the biggest trend for online communication since the email, an instant messenger that taught most how to text. It launched the service in 1997 but the Verizon owned internet pioneer is pulling the plug on its AIM messenger by December 15th.

AOL has dominated the online chat in North America but as the clock kept ticking, time changed, and an evolution of new digital technology, the company was unable to keep the pace with technologies like the SMS, social media chat apps like Instagram, Facebook Messenger and WhatsApp among others and this is the primary reason AOL has decided to give up the fight and shut down Aim with no stated replacement. 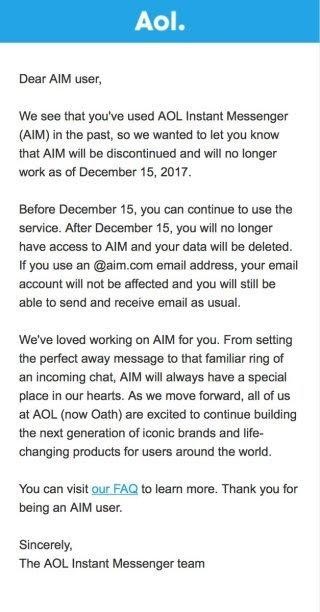 AOL wrote on their AIM help page, that

“We know there are so many loyal fans who have used AIM for decades; and we loved working and building  the first chat app of its kind since 1997,” AOL also added that   “Our focus will always be on providing the kind of innovative experiences consumers want. We’re more excited than ever to focus on building the next generation of iconic brands and life-changing products.”

AOL wrote to users in an email that users can download images they sent until December 15, but the app downloading and installing link will start disappearing now , and this will make it really hard for users to save or even port to their buddy list 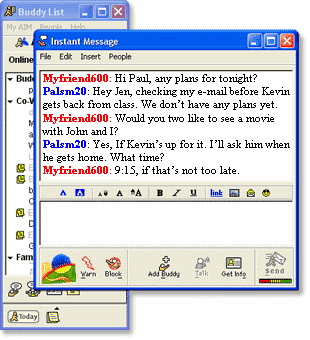 AIM was initially built as a desktop app, which later was also launched as a Standalone app in 1997, it was the ancestors of chats, tweets and status update, but over the years it has competed against ICQ, Yahoo messenger, Microsoft GChat, and the modern day Facebook which has taken over which eventually led to their fall from grace in 2014 , a company which was initially valued at $224 billion to $4.4 billion when it was sold to Verizon in 2015.

For context on the business AOL let slip away, WhatsApp sold that same year to Facebook for more than $19 billion.

Now AIM’s official MacOS, Windows, iOS and Android apps are being pulled off life support and AOL have a perfect away message , with it amazing and unique incoming message , they will always have a place in our hearts and we will sure miss them.