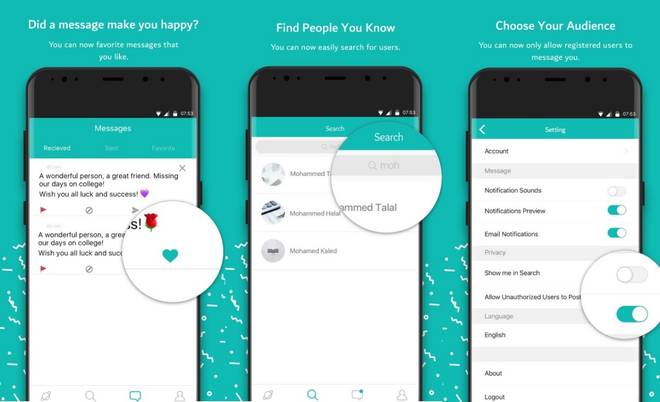 How do you feel when some set of people just have a way of pissing you off for no reason and you really want to give them a piece of your mind but you can’t because they are your boss or they hold a position in the society that will not allow you tell them what you really think of them, worry not as Sarahah has come with a solution to help you ease yourself from the pain of not been able express yourself the way you want to through an anonymous messaging app.

The anonymous messaging app was created by a Saudi web developer Zain Alabdin Tawfiq, and the app is going viral mainly because it allows you send anonymous message to people who you don’t want to know it was sent by you. The app comes in two different language which are English and Arabic.

The word Sarahah means honesty in English , so as reported, some users are already using the app to send hateful text to people who they can’t tell them to their face what they really think of them. This has made the app attractive and has increased its popularity growth allowing it to be among the top 10 in app store in over 30 countries in July with over 300 million users as the app also allows you link your snapchat stories to it as well.

How does Sarahah work?

Sarahah like most apps, once you download it you have to set up an account for it by adding your email, username or choosing a preferred password for it , what makes this app different is that it doesn’t require you to add your mobile number to it so as to keep you 100% anonymous.

Once you sign in it allows you share your Sarahah link to your friends on Facebook, Twitter or WhatsApp and this link is encrypted to help keep you anonymous and confidential. It reads something like xyz.sarahah.com and this link can be sent to anyone even if the person is not a registered member of Sarahah.

When sending a message to a person, the user will have to click on a link which will allow the user write a message , then hit the send button and all the receiver sees is a message without the identity of the sender. 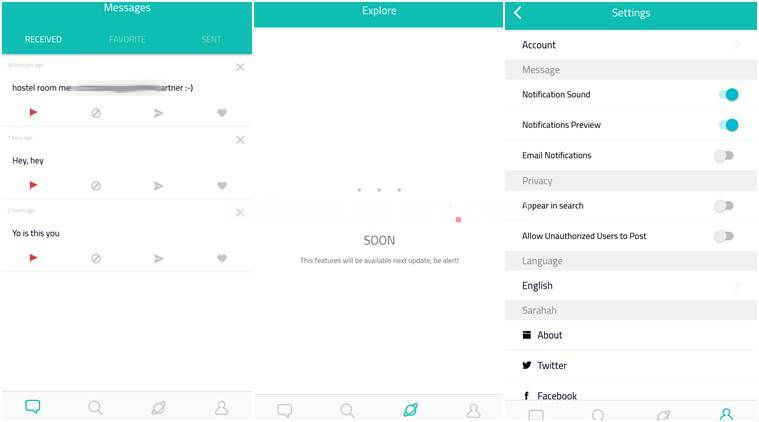 Sarahah doesn’t offer much other than  it can send anonymous messages to random people, it has limited tabs unlike most other messaging , the tabs consists of messages , search, explore , profile, settings , and the message tab contain the received , sent , favourite message , block , or even report the sender to avoid more message from that anonymous sender , more updates are expected on the app as the explore tab isn’t active yet but hopeful will be during the next update.

As you can expect, this is another service that is likely to receive backlash from authorities who have been concerned recently about the rate of growth of message encryption services, Indonesia, China, Russia and Iran are examples of countries that have taken steps to discourage tech companies from doing this. By making laws that make it harder to use VPN services especially in China and Russia, they make it more difficult for tech companies to launch some of their flagship services in those nations.

In more “tolerant” climes like the UK, the government is making arguments against social media encryption even though some experts think this should remain untouched by the government.

Whatever the case though, the argument continues whether encryption which some claim has become necessary to protect civil liberties in harsher political settings has indeed gone too far or whether more needs to be done to even make it tougher. But one thing is clear, there will be good and bad actors in any case.