Apple’s Facetime and Microsoft’s Skype both have a new competition even though we all saw this coming. WhatsApp is rolling out free video calls to its over 1 billion users. The service which is set to launch on Android, iOS and Windows will allow you to video chat with contacts.

In a statement, they said, 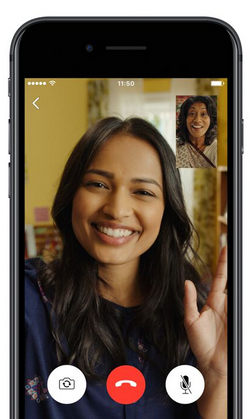 “We’re introducing this feature because we know that sometimes voice and text just aren’t enough… we want to make these features available to everyone, not just those who can afford the most expensive new phones or live in countries with the best cellular networks.”

As seen in the attached video, you will be able to access video calls in the coming days by simply opening the app and clicking on the phone icon as if you wanted to make a voice call. Then you will see video call option pop up. Click on it and begin using the service.

There has been a big emphasis on videos by big tech companies and many have wondered why it has taken WhatsApp so long seeing as some of its competitors have since implemented the service.

Launched in August this year, Duo quickly jumped to the number one spot in Google’s Play Store.

WhatsApp’s voice call service is now used by over 100 million people globally and that represents about 10 percent of the total number of users. The service only rolled out last year. We’ll see how the video calls go.