iOS 10 was released to the public last September and since then it has also recorded some encouraging success. It is now reported that 79 percent of active iOS devices now run on the mobile operating system (OS). Its predecessor iOS 9 still runs on 16 percent of active devices while earlier versions of iOS run on just 5 percent of the devices. 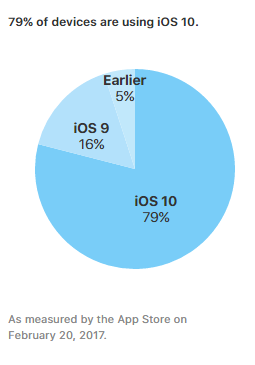 The 79 percent adoption rate for iOS 10 is now better than the 77 percent for iOS 9 at its peak which shows that more people find the new OS more user friendly.

According to MacRumors, iOS adoption continues to significantly outpace Android. Nougat, the latest version of Android, is installed on just 1.2% of active Android devices as of February 6, despite being released six months ago today. Android Lollipop, released in November 2014, is still installed on 32.9% of active devices.

But this advantage is primarily because Apple controls both hardware and software. The other reason could be Apple’s prompt for software update which is something you don’t really get bothered with as an Android user.