Home Business Bitcoin Is Now Trading Above $4,000 For The First Time Ever
Share

Bitcoin’s price is skyrocketing and there’s no sign that it’s slowing down. As of this morning, it was trading at $4,100 making it the first time the cryptocurrency will be hitting the milestone according to CoinDesk. It is even believed that the figure could hit $5,000 by year’s end to make it a great year for Bitcoin but the high price is primarily due to increased demand in Japan where it is estimated that Bitcoin trade in the Japanese currency accounted for about 46 percent global trade. 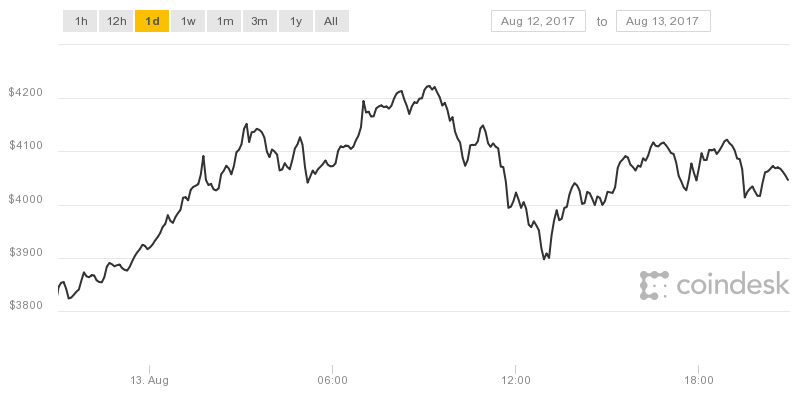 But it’s not only Japan that has seen an increase in demand, other factors like the tension between North Korea and the United States could be responsible for this. You see there are reports that there is now an increased demand in South Korea as well which means just like other natural resources like oil, if the tensions cool down, there could be a fall in demand which would likely drive the price further down.

There is also the theory that since Bitcoin survived the split which gave birth to Bitcoin cash, it means people have a level of confidence in it. If confidence levels are high, it has a way of affecting demand as well.

The other big reason for this could be that as Bitcoin endures even the worst of volatilities, it continues to push mainstream in that even some on Wall Street are beginning to embrace it. In the US, CNBC reports that mutual funds giant Fidelity has added a feature that would allow its customers to view their cryptocurrency (Bitcoin Litecoin and ethereum) holdings from their account. Goldman Sachs also indicated that it would soon become hard to just ignore cryptocurrencies in future in another sign that things are looking well for Bitcoin.

But it’s not just companies like hedge funds who are beginning to rethink their initial hard stance but government authorities as well. Russia, China and Australia have all indicated that they’ll be more involved at least from the regulatory sense which means the currency might be here to stay. Australia even wants to tax transactions which means they might one day start collecting revenue in Bitcoin.

There might be a scientific reason according to co-author of the upcoming book Cryptoassets: The Innovative Investor’s Guide to Bitcoin and Beyond Chris Burniske thinks there’s a correlation between Google Search and Bitcoin prices typically. This means that as people continue to search for things like “bitcoin” on Google, this could have an impact on its overall pricing which is why he warns that the correction would really be bad for those who have collected the cryptocurrency.

4/ The 3 peaks in @Google Search trends were accompanied by 3 of #bitcoin's 6 price bubbles. pic.twitter.com/HmYYms55dk

There is another big test coming probably in November when it could split further in an upgrade proposal called Segregated Witness.