The last time we talked about Dubai’s drone taxi was back in February but it now looks like the technology might be ready for prime time after all. The UAE city announced its first test flight where a driverless drone hovered at a height of 200 metres above the ground for about 5 minutes.

While we have always known that the project would become a reality at some point, what we didn’t know was that they would eventually use a taxi drone designed by the German company Volocopter because we were told back in February that the Chinese Ehang 184 which was showcased at last year’s CES would be used. The drone itself has 18 propellers, backup batteries, rotors, two parachutes and looks like a small helicopter designed for not more than 30 minutes of flight at a time.

To become fully operational though, Dubai will have to construct “voloports” from where passengers would board and disembark and while this is in the worked, it’s important to point that the transport scheme itself would become a reality in five years to allow for logistics to be put in place at least according to Volocopter CEO Florian Reuter.

According to a report in Reuters, the CEO said that “Implementation would see you using your smartphone, having an app, and ordering a volocopter to the next voloport near you. The volocopter would come and autonomously pick you up and take you to your destination. It already is capable of flying based on GPS tracks today, and we will implement full sense capability, also dealing with unknown obstacles on the way.”

The test was part of a ceremony for the Dubai Crown Prince Sheikh Hamdan bin Mohammed to see the technology for himself.

But it doesn’t mean that the Chinese Ehang 184 which has four rotors and is capable of carrying weights of up to 100Kg and can travel at 160Km/hr for 23 minutes at sea level, or 10 minutes at 99Km/hr at a higher altitude is out of the picture. It just means that different drone taxi makers will start gearing up to enter the Dubai market once regulatory bottlenecks have been ironed out.

Besides the German Volocopter and the Chinese Ehang, French Airbus is also designing a drone taxi called Pop.Up System. The Airbus concept is more of a detachable capsule which makes the concept more like a flying car than a drone taxi. 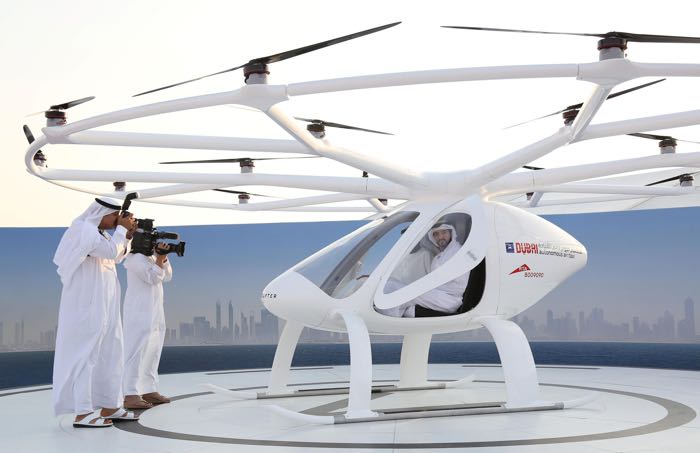