Home Research/How to do it Explaining That WhatsApp And Facebook Data Sharing Collaboration. What is/What Is Not Going To Happen
Share

On 25th of August, WhatsApp made a “shocking” announcement about its plans to start sharing its 1 billion user data with its parent company; Facebook. The update according to them is the first change to privacy policy on four years.

But by coordinating more with Facebook, we’ll be able to do things like track basic metrics about how often people use our services and better fight spam on WhatsApp. And by connecting your phone number with Facebook’s systems, Facebook can offer better friend suggestions and show you more relevant ads if you have an account with them. For example, you might see an ad from a company you already work with, rather than one from someone you’ve never heard of. You can learn more, including how to control the use of your data, here.

This update is a sharp contrast to what their previous policy was but seeing as they were acquired for $19b with no profit made by WhatsApp over the years, Facebook thought it was time to leverage on the data of the 1 billion WhatsApp users to now send them more relevant ads and services you may be interested in. This is not surprising to hear because you see, Facebook reported over $6b in revenue in the second quarter of this year and this now means at least until future earnings reports that Facebook now controls 12 percent of the entire digital ads market which makes it second only to Google which controls 31 percent of that market. With over 1.7 billion people now on Facebook, we knew it was just a matter of time before WhatsApp data would become a revenue tool for future Facebook ads. Of the $6.4b announced by Facebook as revenue in Q2 of 2016, 84 percent of that came from ads, so you see that’s Facebook’s main source of revenue and again it was only a matter of time before they started leveraging on WhatsApp user data.

The new update also means that your phone number which is the main data you have on WhatsApp will now be shared with Facebook and since Facebook already asks users to enter their phone numbers to further protect them online, this information can now be used in conjunction with Facebook to send you targeted ads. So if a business on Facebook has your number for example, using the updated Facebook database, they can now send you targeted ads. Another thing Facebook is likely to use this for is suggest a more refined set of friends and services to you based on the numbers of you and your friends from WhatsApp and Facebook provide.

WhatsApp implemented end-to-end encryption in April for its users which means that from sender to receiver, information is encrypted and cannot be accessed even by WhatsApp team members and the government technically. By the next month, it was already making authorities angry in Brazil where they ordered the service to shut down but lifted the order after some time. If you read the announcement by WhatsApp, they touted this service in spite of the challenges it’s facing with governments. This is to tell you that as a user, you have nothing to worry about when it comes to sharing information with Facebook which announced similar service back in June for the Messenger app.

In as much as we disagree with this new move, here’s what it is not at least;

I am a member of several groups from old schools to other community based groups and virtually in all, I have been seeing this scary reports saying basically that from next week, family members and other Facebook friends will now have access to my private chat. In fact the video below which happens to be one of the many on Facebook too says I have to do this as soon as possible and even goes further to tell us how to avoid this coming digital tsunami.

At least we know that your private chats won’t be made public on Facebook for everyone to see as several videos online are now suggesting. Fear not, your family won’t have access to those messages and files meant for your eyes only. It’s not going to happen because it doesn’t say anywhere in the privacy document and if they have seen it, we would like to review it with them and warn users immediately. They were right about one thing though, you can opt out.

Let me start by saying this is a partial one. You can opt out of the targeted ads from Facebook but you data may be used in other ways. Data may now be used “for other purposes such as improving infrastructure and delivery systems, understanding how our services or theirs are used, securing systems, and fighting spam, abuse, or infringement activities”.

This means that you can run but you can’t hide literally. Seeing as Facebook makes so much of its revenue from ads, who knows what the future holds I terms of opting out. But for now that’s what it is and till we learn more, stay safe.

Now to opt out, go to Settings (in WhatsApp of course) > Account > Share my account info and uncheck the box. See image below or at least use the video because they got part right. 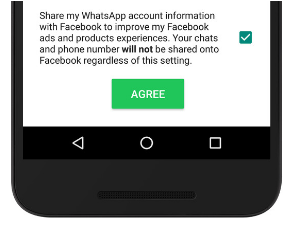 Over 100 million people now use the call feature monthly on WhatsApp.