5G which is short for fifth generation telecom network isn’t expected to widely be commercial reality until the year 2020 but as you might expect, companies including Samsung have all been testing the technology. The International Telecom Union (ITU) is expected to finalise agreements on standards for 5G by 2018 from which time we expect companies to begin extensive outdoor practical tests across markets. In 2014, Samsung announced it had tested transmission speeds of up to 940MB per second in a stable outdoor environment unlike previous tests which were conducted in labs and other indoor environments. Since then, telecom companies like AT&T and Verizon in the United States have all gone ahead to announce that they were testing the possibility of deploying the super fast 5G on their networks. 5G is expected to be 10-100 times faster than today’s average 4G LTE connections. That means you might be able to download a video files including your popular TV series in 3 seconds or less. Imagine that. In a USA today report, according to Verizon 5G will deliver up to about 50 times the throughput of current 4G LTE, with latency down to the single milliseconds. That’s faster than Google Fiber and will theoretically let you to download a full-length Hollywood blockbuster in seconds, and help fuel the exponential explosion of all kinds of connected “Internet of Everything” devices.

“5G is no longer a dream of the distant future,” Roger Gurnani, Verizon’s executive vice president and chief information and technology architect, said in a statement. “We feel a tremendous sense of urgency to push forward on 5G and mobilize the ecosystem by collaborating with industry leaders and developers to usher in a new generation of innovation.”

But this all comes even as the we are yet to fully enjoy the 4G technology across the world. According to the map from the world time zone seen below;

virtually all continents of the world and in fact countries all have the service but when you take a closer look again at the report, you’ll see that in Nigeria for example with a human population of over 160 million, only two companies are said to be providing this service namely Spectranet and Smile. These companies currently operate in big cities across Nigeria. It’s quite surprising to see that none of the four major telecom operators currently provide 4G services. In South Africa for example with a population of about 55 million people has four 4G providers and the list includes MTN which has its biggest operations in Nigeria. This is not to say the Nigerian “4G” providers measure up in terms of practical speeds (throughput) as seen in the report but that’s a topic for another time. But is it possible that the reason we haven’t seen much progress in mobile 4G in many countries across the continent be as a result of regulatory bottlenecks or just simply a lack of motivation to invest in faster technology by telecom companies?

Well according to the last GSMA mobile report on Africa,   over half of the Sub-Saharan residents live in rural areas and don’t have access to some of these services. The operators don’t see much economic benefit in investing heavily in areas where people are not economically empowered enough to pay for these services. It costs a lot of money to set up these services and imagine a scenario where you don’t have that many people who can afford the cost. There is also the issue of infrastructure which is absent across the continent. For example, telecom companies rely heavily on alternative sources of electricity like power generators to maintain services.

See the diagram below for more on the capabilities of 5G vis-a-vis 4G network; 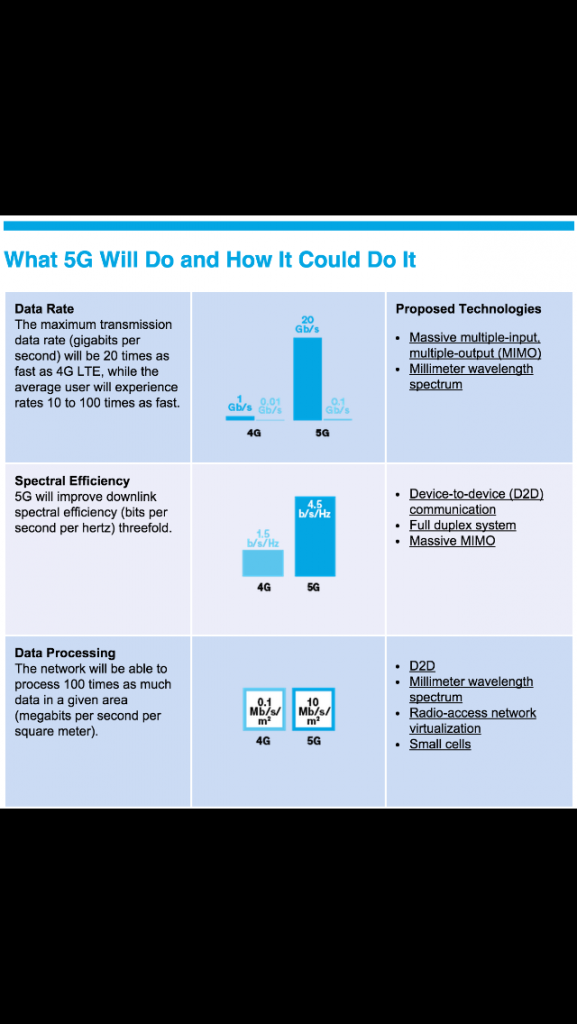 Read about how billing/cost may be a factor why internet service penetration is still not as good as we may want it to be on the African continent here.